When Is Mother’s Day 2022? Date, Significance and History, Know Everything About This Special Day Celebrating Mothers

Mother’s Day is celebrated around the world to honour mothers and motherhood. Even though it is not a public holiday, it is a national legal holiday observed on the second Sunday of May in the United States. Mother’s Day 2022 will be celebrated on May 6. 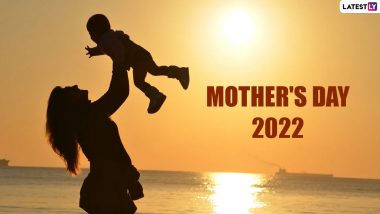 Mothers embody unconditional love, kindness, compassion and courage, they are selfless and forgiving, and they are the pillars of one's life. Mother’s Day is celebrated around the world to honour mothers and motherhood. Mother’s Day is observed on different days in different parts of the world, but in India, America and about 40 countries, it is celebrated on May 8. Here is everything to know about Mother’s Day 2022, from the date to the significance of the history of the joyous affair. Mother’s Day 2022 Celebration Ideas: From Dinner Date to Getting Tattooed Together, 6 Ways To Celebrate This Fun Day.

The date of Mother’s Day differs in different parts of the world, but the day gained modern popularity in America in the early 1900s. Mother’s Day is usually observed in the months of March or May. Even though it is not a public holiday, it was declared a national legal holiday observed on the second Sunday of May in America. Mother’s Day 2022 will be celebrated on May 6.

History And Significance of Mother’s Day

The history of Mother’s day varies in different countries, and some have mythological origins; the modernised version of Mother’s Day originated in the early 1900s. A woman named Anna Jarvis took to the initiative and hosted a Mother’s Day Service of Worship in the church of Grafton, West Virginia, in honour of her late mother. She decided to commemorate this day in memory of her mother and held a memorial service. The day started gaining popularity, and within five years of its observance, it was celebrated in almost every state of the United States.

The day gained official recognition after; in 1914, President Woodrow Wilson decided to sign a proclamation declaring Mother’s day as a national holiday. Over time, as the day became more and more commercialised, Anna Jarvis, the founder of the day, started resenting the day. She even invoked protests against Mother’s day celebrations because she thought that the main objective of the day was being lost in meaningless commercial activities. From Pizza to Pesto Shells, 5 Dishes To Celebrate The Day and Impress Your Mom With Your Cooking.

Mother’s Day is also said to have its origins in the times of ancient Greeks, who held festivities and celebrations in honour of the Mother of Gods, Rhea. Mother’s Day celebrates intending to express gratitude and thank mothers for their unconditional love and selflessness. The day celebrates mothers and maternal figures and honours their sacrifices and dedication towards their children and families.

People celebrate Mother’s day by hosting Mother’s Day parties and getting gifts for their mothers, picnic is a popular tradition on Mother’s Day. Many people take over the chores the mothers do to relax and get all the pampering that they deserve every day.

(The above story first appeared on LatestLY on May 04, 2022 06:39 PM IST. For more news and updates on politics, world, sports, entertainment and lifestyle, log on to our website latestly.com).