When is Friday the 13th in 2022? Know Origin, Significance, Meaning and Superstitions Associated With This 'Unlucky Day'

While the unfortunate date can occur up to three times in a single year, May 2022 holds the only Friday the 13th that we have to survive this year. The fear of the number 13 is so bad for some that it has been called triskaidekaphobia. 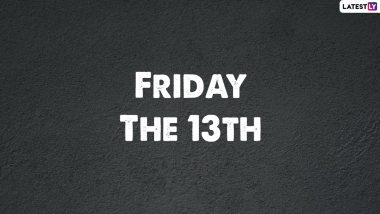 Like many superstitions from across the world that have evolved over time and across various traditions, it isn't easy to find out the origin of Friday the 13th. All the searches will only spell that Friday the 13th is an unlucky day. While the unfortunate date can occur up to three times in a single year, May 2022 holds the only Friday the 13th that we have to survive this year. In Western superstition, the day is considered an out of luck day that occurs when the 13th day of the month in the Gregorian calendar falls on a Friday. One needs to avoid performing certain activities if the number 13 falls on a Friday. Friday the 13th Memes and Jokes: Kick out the Eerie Vibes with These Hilarious Takes on the Infamous Day.

The fear of the number 13 is so bad for some that it has been called triskaidekaphobia. Most of the major airlines, hospitals and hotels also don’t have room number 13 or a 13th floor for the same reason. Well, as now you know very well that you need to be cautious on Friday the 13th, you must also know the history and credulities of the unlucky time. Spooky Stories, Urban Legends and Unlucky Events That Surround the Origin of Black Friday.

The superstitious beliefs surrounding Friday the 13th originated from Jesus Christ's Last Supper before his crucifixion, attended by '13' people.  Leonardo da Vinci’s painting of the Last Supper shows Christ and his 12 disciples in the Upper Room on the 13th of Nisan Maundy Thursday, the night before His death on Good Friday. Moreover, one the Jesus' disciples, Judas Iscariot, who betrayed the Messiah for thirty silver coins also thought to have been the 13th guest to sit at the table. Along with biblical tradition, Friday the 13th has other theories that go back to the incident of the Knights Templar.

Whatever you read about the unlucky day is just the tip of the iceberg. Some of the most common mistakes people make on a Friday the 13th might push them into trouble. One should stay away from black cats, umbrellas, new shoes, ladders, birds, cracks, mirrors, salt, tables and cemeteries. Precaution is better than cure; hence, avoid everything mentioned above altogether as a way to prevent all bad luck.

(The above story first appeared on LatestLY on May 12, 2022 01:11 PM IST. For more news and updates on politics, world, sports, entertainment and lifestyle, log on to our website latestly.com).