World Wildlife Day 2021 Date, History and Signifiance: Know More About the Day Dedicated to Raising Awareness of the Flora and Fauna on Earth

Every year on March 3, World Wildlife Day is celebrated and its aim is to analyse/spread awareness about the "forest-based livelihoods" and also promote forest wildlife management models and practices that accommodate both human well-being and the long-term conservation of forests. 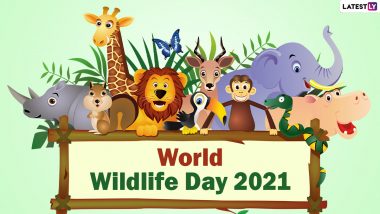 Every year on March 3, World Wildlife Day is celebrated and its aim is to analyse/spread awareness about the "forest-based livelihoods" and also promote forest wildlife management models and practices that accommodate both human well-being and the long-term conservation of forests. The flora and fauna of the planet Earth must be protected and it is imperative that we take major steps for forest-dwelling species of wild fauna and flora to reduce the number of endangered species and work towards sustainable ecosystems

As per wildlifeday.org, "forests, forests species and the livelihoods that depend on them currently find themselves at the crossroads of the multiple planetary crises we currently face, from climate change, to biodiversity loss and the health, social and economic impacts of the COVID-19 pandemic."

In its proposal, the General Assembly reaffirmed the intrinsic value of wildlife and its various contributions, including ecological, genetic, social, economic, scientific, educational, cultural, recreational and aesthetic, to sustainable development and human welfare. The General Assembly took note of the outcome of the 16th meeting of the Conference of Parties held in Bangkok from 3 to 14 March 2013, especially at the Resolution Conference. Naming March 3 as World Wildlife Day to raise awareness about the world's wildlife and flora, and recognized the important role of CITES in ensuring that its international trade does not threaten the survival of the species. The General Assembly requested the CITES Secretariat in collaboration with the relevant organizations of the United Nations system, to facilitate the implementation of World Wildlife Day.

Today is World Wildlife Day with the theme: "Forests and Livelihoods: Sustaining People and Planet," as a way to highlight the central role of forests, forest species and ecosystems services in sustaining the livelihoods of hundreds of millions of people globally, and particularly of Indigenous and local communities with historic ties to forest and forest-adjacent areas.

The beginning of which was proposed by Thailand to raise awareness and celebrate the world's wild creatures. The General Assembly inspired the promotion of the teaching of wildlife in a variety of ways, including ecological, genetic, scientific, aesthetic. It can also be said to protect the survival of various fauna and flora species.

(The above story first appeared on LatestLY on Mar 02, 2021 04:42 PM IST. For more news and updates on politics, world, sports, entertainment and lifestyle, log on to our website latestly.com).