'Fit and Tipsy': Working Out And Better Fitness Can Be Tied To Higher Alcohol Consumption, Finds Study

The study was held to examine if greater levels of cardiorespiratory fitness is related to higher alcohol consumption in adults. 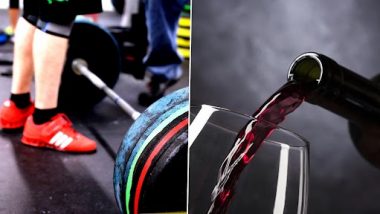 A study claims that those who exercise more and have better fitness levels also have the tendency of consuming greater amounts of alcohol. Image used for representational purpose only (Photo Credits: Pixabay)

New York: Generally, people equate consumption of higher amounts of alcohol to bad health and the usual tendency is to attribute good health to several factors with not consuming alcohol being one of them. However, a study in the American College of Sports Medicine titled "Fit and Tipsy" found in its conclusion that "higher fitness levels are significantly related to greater alcohol consumption among a large cohort of adult patients." The study was held to examine if greater levels of cardiorespiratory fitness is related to higher alcohol consumption in adults. Why You Should Drink Red Wine: 5 Excellent Reasons to Guzzle It.

This is not the first time that a study has linked workout and drinking. A study back in 2001 titled "Alcohol consumption and health-promoting behavior in a U.S. household sample: leisure-time physical activity", suggested that those who exercised felt like having a drink more than those who didn't. In 2015, a study titled "Daily Physical Activity and Alcohol Use Across the Adult Lifespan" concluded that "in contrast to proposals that physical activity (PA) can be a substitute for alcohol use, people who engage in greater overall PA generally consume more alcohol on average than less- active peers."

While the recent study throws interesting light and suggests an interrelationship between higher fitness levels and the tendency to hit the bottle, the outcome of the study should be taken with a pinch of salt. The participants in the study were mostly white Americans from well off or prosperous backgrounds. Also, it is to be remembered that the study only shows the connection between intense workout and its possible link to heavy drinking, but in no way suggests that working out extra hours causes one to drink heavily.

(The above story first appeared on LatestLY on Dec 27, 2021 07:49 PM IST. For more news and updates on politics, world, sports, entertainment and lifestyle, log on to our website latestly.com).