The warning comes after health authorities saw 79 cases of the invasive Group B Streptococcus bacteria infection in September and October 2021. The report adds that as many as seven deaths were reported to be linked to the outbreak. 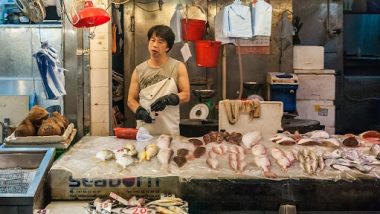 Beijing, October 21: Hong Kong is grappling with a health scare after an outbreak of a potentially dangerous bacterial infection which is being linked to freshwater fish. According to a report by hongkongfp.com, seafood experts have cautioned shoppers against touching freshwater fish at these wet markets. The warning comes after health authorities saw 79 cases of the invasive Group B Streptococcus bacteria infection in September and October 2021. The report adds that as many as seven deaths were reported to be linked to the outbreak.

According to the report, the Centre for Health Protection (CHP) on Thursday confirmed that it had identified a cluster of 32 people infected by the same ST283 strain of the bacteria. It added that a surge in the number of infections were observed as compared to nearly 26 cases per month. The new cases that were reported were connected to a wet market in Tsuen Wan, and a company in Yuen Long. China Fights New COVID-19 Outbreak; Hundreds of Flights Cancelled, Schools and Tourist Sites Shut, Testing Ramped Up.

A statement by the CHP was quoted in the report saying that a probe into the infection showed that some of the patients had a history of handling freshwater fish, including grass carp, before onset. Some of them had reported the handling of raw freshwater fish with hand wounds.

In the wake of the outbreak, experts have urged the public to avoid eating raw seafood. A report by South China Morning Post informed that an alert was sounded after 79 cases of invasive Group B Streptococcus bacteria infection were detected in patients at public hospitals between September and October 10. The Centre for Health Protection reported another nine cases on Thursday, bringing the total to 88. The report adds that cases have been linked to grass carp, bighead carp and snakehead fish.

The South China Morning Post quoted Lee Choi-wah, chairman of the Hong Kong Chamber of Seafood Merchants, saying that he feared businesses would be hurt, and urged sellers and shoppers to take precautions when handling fish.

(The above story first appeared on LatestLY on Oct 21, 2021 10:58 PM IST. For more news and updates on politics, world, sports, entertainment and lifestyle, log on to our website latestly.com).