Solah Shringar During Sawan 2020: From Mangal Sutra to Sindoor, How Does Each of the 16 Beauty Adornments Bring in Good Luck For Married Women During the Auspicious Shravan Month 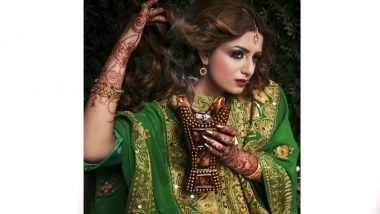 Happy Sawan ka Mahina! The holy month of Shravan has begun when devotees of Lord Shiva fast and pray. Some even carry kawar and travel to the holy destination where Lord Bholenath is said to reside. However, married women fast for Lord Shiva as well and an important part of their devotion is considered to be solah shringar which is the 16-step beauty adornment ritual. Solah Shringar doesn't just make women look prettier but is also said to bring in good luck. The sixteen adornments are to bring happiness and prosperity to the house. The auspicious sixteen adornments ritual is also mentioned in the Rigveda and it is said to not only enhance beauty but bring in positivity.  Let us discuss in detail the components of these 16 step beauty ritual and their importance.

You don't have to do the solah shringar every day during Sawan. You can just do it on Mondays which is considered very important during the holy month of Shravan.

(The above story first appeared on LatestLY on Jul 09, 2020 03:24 PM IST. For more news and updates on politics, world, sports, entertainment and lifestyle, log on to our website latestly.com).