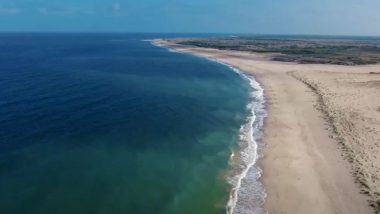 A photo of beach in India (Photo Credits: ANI)

New Delhi, October 11: Eight beaches in India have been accorded the 'Blue Flag' certification by an International Jury, Union Minister of Environment, Forest and Climate Change Prakash Javadekar announced on Sunday. India has also been awarded the 3rd Prize by the International Jury under the "International Best Practices" for pollution control in coastal regions. "India is also the first country in Asia-Pacific region which has achieved this feat in just about 2 years time," Javadekar added. Odisha’s Puri Beach Becomes Asia’s First to Be Awarded Blue Flag Certification.

India had recommended eight beaches for the coveted 'Blue Flag' international eco-label and all of them have been accorded the certification. The Indian beaches that have been awarded the 'Blue Flag' are Shivrajpur (Dwarka-Gujarat), Ghoghla (Diu), Kasarkod and Padubidri (Karnataka), Kappad (Kerala), Rushikonda (Andhra Pradesh), Golden (Puri-Odisha) and Radhanagar (Andaman and Nicobar Islands).

"It is an outstanding feat considering that no 'BLUE FLAG' nation has ever been awarded for 8 beaches in a single attempt (sic)," Javadekar said in a tweet message adding "this is also a global recognition of India’s conservation and sustainable development efforts".

An outstanding feat, as no #BLUEFLAG nation has ever been awarded for 8 beaches in a single attempt.

What is 'Blue Flag'?

The Foundation for Environment Education (FEE) in Denmark gives 'Blue Flag' certification to beaches based on 33 stringent criteria in four major categories that are environmental education and information, bathing water quality, environment management and conservation and safety and services in the beaches. The 'Blue Flag' is one of the world’s most recognised voluntary awards for beaches, marinas, and sustainable boating tourism operators.

The 'Blue Flag' beach is an eco-tourism model endeavouring to provide the tourists/beachgoers clean and hygienic bathing water, facilities/amenities, safe and healthy environment and sustainable development of the area.

(The above story first appeared on LatestLY on Oct 11, 2020 06:55 PM IST. For more news and updates on politics, world, sports, entertainment and lifestyle, log on to our website latestly.com).