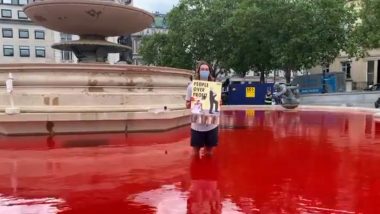 Animal rights activists dyed Trafalgar Square’s fountains blood-red in central London. According to the Animal Rebellion group, animal farming is risking and can result in future pandemics. They said that the government ministers, have "blood on their hands". Some vegan activists dyed the water in red and waded through the fountain, others held placards and staged a protest dressed as sea animals following guidelines of social distancing. The Metropolitan Police said two people had been arrested on suspicion of criminal charges and taken into custody. The protesters said they wanted to raise attention about animal exploitation which they believe to have caused the coronavirus pandemic. DISTURBING! Chimpanzee Forced to Wear Face Mask, Ride Bicycle and Spray Coronavirus Disinfectant at Thailand Zoo, Animal-Cruelty Video Goes Viral.

Animal Rebellion shared videos and pictures of the protest on their social media handles with the caption, "We are here today to demand that the government prevent future pandemics by ending animal farming and transitioning to a plant-based food system." Stephanie Zupan, a representative of Animal Rebellion, said, "The government must now begin a transition towards a plant-based food system, or risk future zoonotic pandemics of catastrophic proportions." What Do You If You Witness Animal Cruelty? Steps to Take if You Encounter Animal Abuse.

Animal Rebellion have now dyed the Trafalgar Square fountains red, symbolising the blood that is on the hands of the UK Government. We are here today to demand that the government prevent future pandemics by ending animal farming and transitioning to a plant-based food system. pic.twitter.com/FAA6tW1wn1

“The Government has blood on their hands” - This crisis could have been prevented. The science tells us that 3 out of every 4 new infectious diseases originate from animals.#PreventFuturePandemics #EndAnimalFarming #COVID19 #AnimalRebellion pic.twitter.com/4z7Pk8JmN9

The Government must lead a transition to a just and sustainable plant-based food system, to prevent future pandemics and avert climate catastrophe.

According to the World Health Organization, a zoonosis is "any disease or infection that is naturally transmissible from vertebrate animals to humans," and they can be "bacterial, viral, or parasitic, or may involve unconventional agents."

According to scientists, COVID-19 emerged from a market in China where varying species were kept and slaughtered in close confinement. It is said to have originated most likely from a bat, at the seafood market in Wuhan in late 2019. The group said protests were also held in 20 other cities, including Bristol, Brighton, Amsterdam, Barcelona and New York.

(The above story first appeared on LatestLY on Jul 12, 2020 02:57 PM IST. For more news and updates on politics, world, sports, entertainment and lifestyle, log on to our website latestly.com).