BTS has been named as 2020’s IFPI Global Recording Artist of the Year Award. With this, they also became the first South Korean and the first Asian to win the title. It is a celebratory time for ARMYs, who has been up and above congratulating their favourite K-Pop boy band. 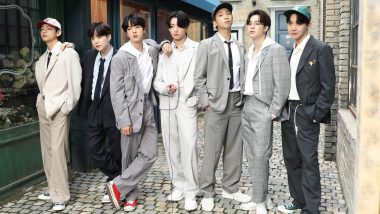 South Korean boy band, Bangtan Boys, aka BTS, have been crowned as 2020’s IFPI’s Global Recording Artist of the Year. Can it get any cooler? Well, wait for it, with the latest achievement, the K-Pop boy band also became the first South Korean and Asian ever to earn the title. Well, when ARMYs say “BTS Paved the Way,” they sure mean it, and the boy band have been proving it so right! Haters will hate, and some even pass on nasty racist comments, but the Bangtan Boys only proved their skills, and proved their worth of fame they enjoy. K-Pop ARMYs are beyond proud as they flooded social media timelines praising BTS and congratulating them for setting the new mark.

BTS is smashing records, one after another. It goes without a doubt that the seven-member group had a hugely successful 2020, becoming the first Korean pop act to reach no.1 on the US Billboard Hot 100 singles chart, with their English song “Dynamite,” and securing its first major Grammy nomination for the same song. The boy band was also named Entertainer of the Year by Time Magazine. If all of it were not enough, now they added another feather in the cap.

The K-Pop phenomenon has been named as 2020’s IFPI Global Recording Artist of the Year Award. It is an annual honour that recognizes an act’s worldwide popularity across streaming and sales, including vinyl, downloads and CDs. With this, they also became the first South Korean and the first Asian to win the title. It is a celebratory time for ARMYs, who has been up and above congratulating their favourite K-Pop boy band.

WHEN WE SAY, "BTS PAVED THE WAY", WE MEAN IT 🥳💜#BTSNo1GlobalArtist pic.twitter.com/kVKByqAMf0

First Ever Asian to Rank #1 at IFPI

IF THIS DONT MAKE YOU PROUD THN IDK WHAT WILL😭😭😭😭

ARMYs Are Beyond Proud

bts #1 world’s best selling artists in 2020, the first and only non-english act to top the ifpi chart @BTS_twt #BTSNo1GlobalArtist pic.twitter.com/vDgPA1B6Uk

@BTS_twt are officially IFPI’s Global Recording Artists of 2020! It was a historic year for the band which saw 3 album releases and multiple charts and sales records broken domestically and globally.

they deserve this more than anyone im beyond proud #BTSNo1GlobalArtist pic.twitter.com/8zxMX5MC85

While ARMYs enjoy BTS’ latest feat, other popular artists too made it to the prestigious award list. American singer, Taylor Swift came in second in the IFPI Global Artist Chart, while Canadian rapper Drake was third.

(The above story first appeared on LatestLY on Mar 04, 2021 09:28 PM IST. For more news and updates on politics, world, sports, entertainment and lifestyle, log on to our website latestly.com).