Fact Check: Crows' Attack At Supermarket in Saudi 'Beginning End of The World?' Know Truth About The Viral Video 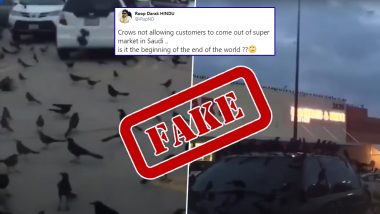 Along with the Coronavirus news updates that keeping coming almost every minute, people in India are also keeping a tab on the locust swarms that are attacking severely in some states. The videos of these locust swarms are quite scary to look at, seeing their numbers. Now similarly, a video of crows in such large numbers gathered outside a supermarket has been shared online. The 'crows attack' is said to be filmed in Saudi. The video is definitely scary to look at with a caption creating panic about the 'end of the world', but it is not from Saudi. The incident is from a parking lot of a Walmart in Texas, captured in the year 2018. The video has resurfaced with people calling it a scene from Saudi Arabia's supermarket. Fact Check: Bizarre-Looking Bird Caught Climbing Over Church in Italy? Know Truth About Fake Viral Video.

The video shows about thousands of crows all gathered together, some perched up people's car, some cawing loudly, unaffected by the presence of people around. The video looks straight out some horror movie! During the lockdown, we have heard of instances of animals reclaiming the earth and the video has been falsely shared to be from Saudi Arabia. One of the users on Twitter even captioned it, "Crows not allowing customers to come out of super market in Saudi .. is it the beginning of the end of the world ??" Fact Check: Video of Dragon-like Creature Disappearing in Sky is NOT 'Coronavirus Leaving China', Here's The Truth About Viral Clip.

Crows not allowing customers to come out of super market in Saudi ..

is it the beginning of the end of the world ??🙄 pic.twitter.com/5NKy0bXSqR

Crows attack not allowing customers to get out of super market in Saudi😂 pic.twitter.com/NntD7BfI1b

Here's The Real Video From Years Ago:

If you too do a simple check for crow attack at Walmart on YouTube, there are so many similar videos from Texas, Houston, which are uploaded years ago. So the video on Twitter is not a recent one and definitely no sign of the end of the world. A lot of such fake reports, to show animals and birds are taking over have been shared online to spread panic among the people. It is difficult to find out, whether they are true since we have read of real instances of animals coming out too. But, we would urge our readers to check the authenticity of any such videos before passing them along.

(The above story first appeared on LatestLY on May 28, 2020 12:28 PM IST. For more news and updates on politics, world, sports, entertainment and lifestyle, log on to our website latestly.com).