Red Mercury in Old TV and Radio Sets Will Help You Get Money? Know What is It and Truth About Viral Messages Claiming to Earn Money Through It

A certain message doing the rounds on social media these days is about presence of red mercury in old TVs, radio sets and electronics. It states that people are willing to pay any amount to buy these old TV sets because it contains the substances which has a lot of value in the market. But is it true? 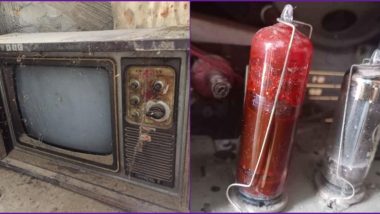 Almost everyone is constantly logged in on social media these days. But while seeking information off these mediums, there are also a lot of fake news and messages being passed regularly. A certain message doing the rounds on social media these days is about presence of red mercury in old TVs, radio sets and electronics. It states that people are willing to pay any amount to buy these old TV sets because it contains the substances which has a lot of value in the market. But is it true? Should you not sell off the old TV sets or sell it off and earn money? The messages are fake as there is no definite proof if any of these electronics use red mercury. Lockdown in India to Be Reimposed From September 25? PIB Fact Check Reveals Truth Behind Fake Post Quoting NDMA.

The messages about red mercury in TV sets are doing the rounds for a while now. Similar 'rumoured' messages have been passed around in the last two months as well. Most people have switched to LEDs nowadays and the message talks about the really old TV sets which had a shutter in the front. There are a variety of messages about red mercury but the point being it is a very expensive material which is not available easily today, so buyers are willing to pay huge amount to buy the old electronic sets. One of the claim warns of not picking up any such calls and not sell away your old electronics in return for money. Viral Message Claiming That Government Can Read WhatsApp Chats is Fake.

What use is the red mercury that's going out inside the old TV pic.twitter.com/2fyOopHfh6

So do TV sets really have red mercury? No. In fact, there is a lot of uncertainty if red mercury is a material at all. There are more than one myths associated to this substance. BBC's article from 2019 even mentions of people's belief in it as an elixir. People also are constantly said to be on a hunt for this substance as it is used in making arms and nuclear weapons. There is no basis to the claim that it is used in old TV sets.

What is Red Mercury?

Red mercury is purportedly a substance of uncertain composition which again makes it an ambiguous material. Also with so much secrecy maintained about manufacturing of nuclear weapons, it is not known if red mercury even exists! It is said to be a con material used to make money by scamsters.

The real red mercury is mercury sulphide. It is a red-coloured ore that contains mercury. And mercury is highly hazardous to human health, so it is advised to not have to deal with it without expert help.

So some people have come forward to warn others that there is no truth to these viral claims and you could end up being scammed in the process.

Here's an Example of a Warning:

So if you come across messages asking for old TV sets know that they are scamsters trying to just make some money. There is no red mercury in any of your old electronics. So do not pay heed or pass on these messages.

Red mercury is present in old TV sets and radio.

It is a fake claim with no proofs of red mercury existence.

(The above story first appeared on LatestLY on Sep 23, 2020 05:10 PM IST. For more news and updates on politics, world, sports, entertainment and lifestyle, log on to our website latestly.com).