A man was having a good time with his family at a beach in Florida when he spotted a shark lurking in the waters ahead of them. After seeing the shadow of the shark on a drone camera, he ushered his family to safety. 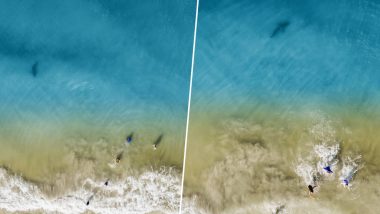 A father who was taking pictures on his drone camera saved his three children after he found out that a shark was approaching them. The incident happened at New Smyrna Beach last week in Florida. Dan Watson was with his wife and three children on the beach when he saw the shark coming towards kids on the drone's display. He immediately shouted at his family who were at a distance, to move away from the water. Looking For Perfect Instagram Picture? Model Gets Shark Bites While Photoshoot.

Following the incident, Dan who is a professional photographer took to social media sharing stunning pictures of the scene. The first photo shows his wife and his three children playing in the water, while the second one shows running towards the shore as the shark lurks in the waters behind them. A 50-Year-Old Naked Body Surfer at the Nudist Beach Headbutted a Shark Then Fought It Off by Punching It

Check out the pictures here:

See that dark shadow making its way straight for the shore & those people? That was my view this weekend while flying my Mavic 2 Pro… and oh, 3 of those people are my kids! Swipe to see the next image that resulted from my yelling to get out of the water and the unmistakable outline of a shark. Definitely too close of an encounter for my liking! Thinking my @djiglobal drone is now coming with me to every beach day!!! #dji #mavic2pro #polarpro

Dan's wife Sally Watson told Central Florida station News 13, "When you think of a shark, you think of them in deep water, you don't think of them extremely close, and you don't think they'll come in knee-deep water … it is terrifying to see them come that close to my kids." Last month, in a similar incident, a North Carolina dad saved his teenage daughter from shark attacks by punching the big fish five times. Florida has had 827 unprovoked shark attacks since 1882.

(The above story first appeared on LatestLY on Jul 02, 2019 02:33 PM IST. For more news and updates on politics, world, sports, entertainment and lifestyle, log on to our website latestly.com).