Have Sensitive Issues Been Reduced to 'Content' on Social Media? Here's the Point We're Missing When We Shame Others for Not Posting Instagram Stories, Tweets, or Posts About Horrific Atrocities!

While we know that this case has opened a pandora's box leading to people strongly criticising the govt., policies, judiciary and most importantly the never-changing mindset of people, it also brings out an issue concerning the social media outrage. 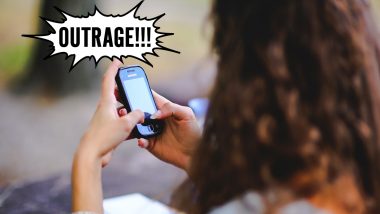 One of the most barbaric incidents that has shaken India is the Hathras gangrape of a 19-year-old that brings back the chills of Delhi's Nirbhaya case. The monstrous rape led the victim to succumb to horrific injuries this week. There is a justified widespread outrage over the gangrape and murder of the young woman including her alleged forcible cremation, subsequently. While we know that this case has opened a pandora's box leading to people strongly criticising both the state and central govt., policies, judiciary and most importantly the never-changing mindset of people, it also brings out an issue concerning the social media outrage. This sets yet another example of how sensitive issues like the Hathras gangrape case has been reduced to social media 'content' for most people. This goes especially for the people who shame others for not 'sharing their grief' via Instagram stories, tweets, or posts on the Hathras Case. Often times than not, these are the very people who have a hard-hitting post about the sensitive case, immediately followed by some funny memes or brand promotion. 2012 Delhi Gangrape Case Lawyer Seema Kushwaha to Fight Case of Hathras Victim.

Soon after the news of the Hathras rape case followed outrage on social media with people posting notes, condemnation, violence against women and the whole "rape culture" in India. From influential personalities online to people with/without an agenda of any form, netizens took to social media to share their frustration, hatred and other forms of emotions and opinions. However, while the initial outburst on social media made sense, it was soon followed by shaming and blaming other people who didn't post about the Hathras rape case on social media. People went ahead to take names and asking each other to "speak up". Balrampur Rape Case: Kareena Kapoor Khan Strongly Reacts, Demands for the Abuse of Women to Stop.

We are not taking away anything from the fact that issues like this need a voice and a strong one at that, BUT is making the case merely about the content you post on social media to create a "morally-correct" image, the right way to go? And it doesn't end there, some of them take it a notch higher by shaming others about not doing the same.

Why Do Some People Have Absolutely No EVIDENT Reaction to The Cases Like The Hathras Rape Case?

NO this doesn't necessarily mean that they are not equally heartbroken, confused and angry at the system or the whole predicament. Some of these people are exhausted, excessively hurt/in shock to react to situations like this or are of the opinion that a mere social media post is not going to change anything at all. Some know that even if they wished to, they won't be able to frame their opinion on such a sensitive issue confidently on social media. AND some are actually looking for real physical protests over these seemingly flaky online posts. Hathras Rape Case: Kareena Kapoor Khan Says 'So Sorry' And Demands Justice For The Victim.

From the backlash faced by the government, the system to the horrific society that we have created around us based on gender inequality, racism and other similar atrocities, there is often so much to say BUT here's the point we are missing when we shame others for not posting on social media: We create a bullying environment and go completely off the main villain in the whole situation.

The idea is to strategically work in a way to bring a change TOGETHER! We must channelise out energy towards focusing on the main issue. Also, each one of us has our own way to grieve or express rage, it is important now more than ever to stand united.

(The above story first appeared on LatestLY on Oct 02, 2020 02:21 PM IST. For more news and updates on politics, world, sports, entertainment and lifestyle, log on to our website latestly.com).