The Indian government has reportedly blocked 43 more Chinese apps. Social media users have flood the platforms with funny memes and jokes, as a way to show their support to the decision. Let us check out the best reactions here. 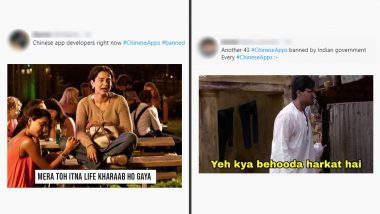 The Indian government has reportedly blocked 43 more Chinese apps, including, Alibaba Workbench, AliExpressm Alipay, and WeDate. The Ministry of Electronics and Information Technology (Meity) banned the applications as the apps were allegedly engaged in activities prejudicial to the country’s sovereignty, defence, integrity, security and public order. As the move was announced, social media users have flood the platforms with funny memes and jokes, as their way to show their support to the decision. #ChineseApps has once again taken the top spot on Twitter with desi netizens sharing hilarious reactions on it.

The Indian government has been working stringently to protect the country’s sovereignty. Any application that seems to threaten the security are being taken to scrutiny, as a result of which the apps get banned. On June 29, the government made its first move after it blocked access to 59 mobile, including popular video-sharing Chinese app, TikTok. Social media was filled with reactions. Again, on September 2, 118 more apps, including PUBG Mobile Games, were banned under section 69A of the Information Technology Act.

At the time too, netizens were seen showering their support to the decision by sharing memes on social media. So, when Meity announced blocking access to more 43 mobile apps, it was bound to garner significant reactions. Twitter is filled with hilarious memes and jokes, celebrating the government’s move to ban more applications.

Another 43 #ChineseApps banned by Indian government

Another 43 #ChineseApps Banned By Indian Government..

*Those Who Haven't Used Any Of This App: pic.twitter.com/xGJvWEKI84

This is so Funny!

Another 43 #ChineseApps banned by Modi government

The order to ban the apps was issued under section 69A of the Informational Technology Act. The list of banned apps includes MangoTV, Alibaba Workbench, Alipay Cashier, Lalamove India, DingTalk, Singol and Happy Fish, among others.

(The above story first appeared on LatestLY on Nov 24, 2020 08:03 PM IST. For more news and updates on politics, world, sports, entertainment and lifestyle, log on to our website latestly.com).