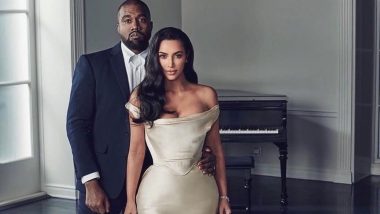 The American rapper Kanye West has made a major announcement on the Fourth of July. Kim Kardashian’s husband has shared a tweet about him running for President this year and it is one of the major announcements made on the federal holiday in the United States. Using the hashtag ‘2020 VISION’, Kanye has announced about his presidential run for 2020 on the Independence Day. US President Election 2020: Donald Trump to Resume Election Rallies from Oklahoma.

Kanye West tweeted, “We must now realize the promise of America by trusting God, unifying our vision and building our future. I am running for president of the United States Flag of United States! #2020VISION.” Kim Kardashian also re-posted the announcement on her social media handles and the rapper’s close friend Elon Musk replied to the tweet. He responded saying, “You have my full support!” Kim Kardashian Celebrates 6th Wedding Anniversary with Kanye West, Says ‘Forever to Go, Until the End’.

We must now realize the promise of America by trusting God, unifying our vision and building our future. I am running for president of the United States 🇺🇸! #2020VISION

You have my full support!

This isn’t the first time that the Grammy-winner Kanye West has talked about running for entering the United States’ presidential election. In November 2019, during an event, Kanye had stated, “When I run for president in 2024, we would've created so many jobs that I'm not going to run, I'm going to walk.” Since quite sometime the rapper has been dropping hints about jumping into politics. As per a report in Forbes, Kanye at the 2015 MTV Video Music Awards had said that he was planning on running for president in 2020. Well, that has indeed turned into reality!

(The above story first appeared on LatestLY on Jul 05, 2020 08:38 AM IST. For more news and updates on politics, world, sports, entertainment and lifestyle, log on to our website latestly.com).