Kerala: Heart-Touching Video of Policemen Helping Homeless Man With Food While He Maintains Social Distance, Reinforces How We Can Beat Coronavirus Together 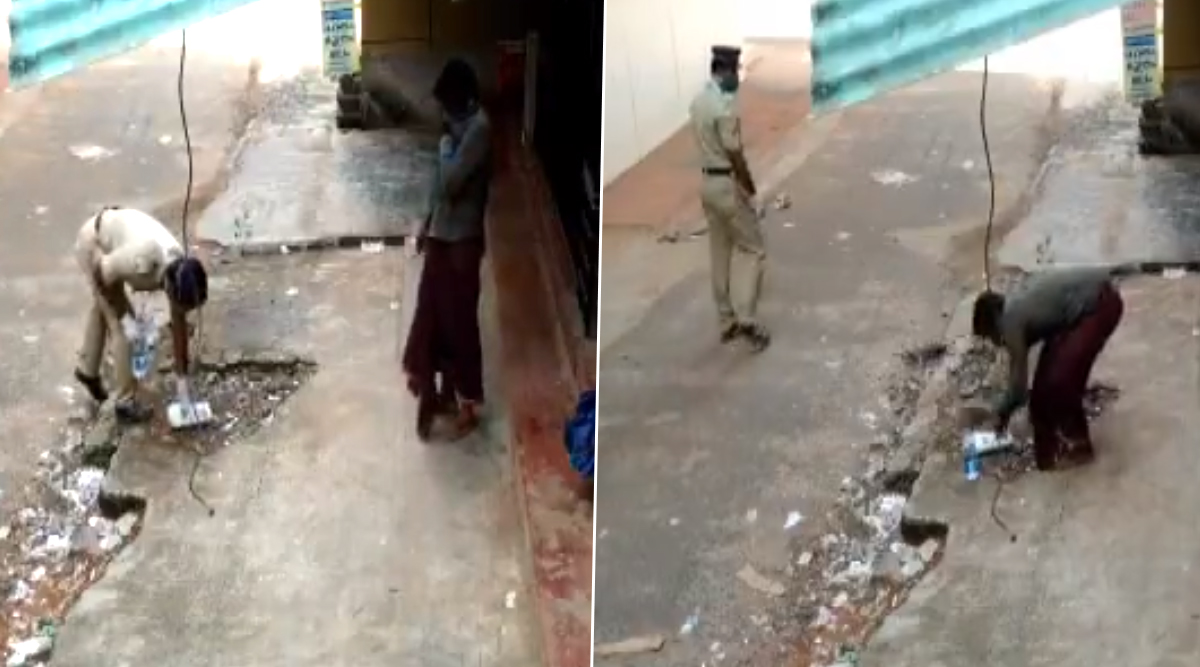 The importance of social distance is at urgent need at this moment. We are in a battle with the deadly virus that researchers are yet to know more about. Not much information is available for the novel coronavirus that has infected over a million in a few months globally. Ever since its first outbreak last year in the Chinese city of Wuhan, COVID-19 has spread significantly with many countries going under lockdown. India too is under lockdown as the virus has taken a toll on the citizens. Amid the ongoing crisis, a heart-touching video has appeared on social media, showing Kerala policemen helping a homeless man with food while he maintains social distance. The clip has generated thousands of views with netizens praising everything in the 38-seconds video. It reinforces how we can beat the deadly virus. Kerala Police Share Footage of COVID-19 Lockdown Violators Shot on Spy Drone With ‘Tracer Bullet’ Challenge Commentaries.

The footage begins showing a homeless man lying on the stairs. Three police officers approach him to give food and water. But the next thing inspires the viewers even more. The homeless man immediately stops them, asking to step back and keep the food at a distance, while he quickly covers his mouth. His self-awareness is impeccable. The police obey his demand and place the food at a distance and go away, as the man collects it and eats. Social Distancing Ad by Ohio Department of Health Wins Praises Online for Describing the Risk of COVID-19 Spread.

Twitter user, @jishasuryaTOI uploaded the clip with a caption, “Everything about this video, be it the humanity of @TheKeralaPolice or the level of awareness of this man on street, gives hope that we shall overcome #Covid19.” In the follow-up tweet, the user stated that this happened under Perambra police station limits in Kozhikode, Kerala.

Everything about this video, be it the humanity of @TheKeralaPolice or the level of awareness of this man on street, gives hope that we shall overcome #Covid19 pic.twitter.com/1Rq4OQQm1q

This Happened in Kozhikode

Update: This happened under Perambra police station limits in Kozhikode

The video instantly went viral, with netizens praising the cops and the homeless man, giving them hope that we can overcome the current situation soon, if we all follow humanity but also maintain social distance.

Nice awareness.. This awareness is missing in highly educated people

Take a bow @TheKeralaPolice . This is such a beautiful exhibit of duty (both state and citizen) and compassion. As the Prophet of Islam (PBUH) said, strive for a JUST society and peace and happiness will prevail. God bless

They Laud the State!

Kerala administration and the people are an example for all of us around the country. I hope we see #KeralaModel implemented in India soon

Goosebumps . What a state ! 👍🏻👏 I cannot believe this is in the same country with a national leadership that believes in 9pm 9minutes woo woo .

The viral video sure taught the two most important lessons at this hour. With the nation being under lockdown, many things are affected. But supporting each other during this time is essential. We must help each other and also maintain social distance for the betterment of everyone.