Kokilaben's 'Rasode Me Kaun Tha?' Funny Memes and Jokes Are Here to Stay! Check out Hilarious Posts If You Are as Clueless as the 'Khali Cooker' Jo Rashi Ne Gas Par Chadha Diya 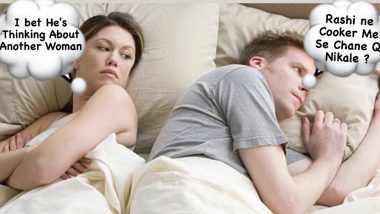 "Jab mai nahane gayi thi, tab rasode me kaun tha?","Cooker me se channe nikal ke khali cooker chadha diya...", "Ye Rashi thi..." if these are lines haunting your days and nights, you're not alone. Ever since Kokilaben’s dialogues have gone viral, netizens can't stop churning out funny memes and jokes that have now taken over social media! It all started after a video from Saath Nibhana Saathiya where Kokilaben is debunking the khali cooker mystery was turned into a viral rap. Singer-music producer Yashraj Mukhate made a rap version of Saath Nibhana Saathiya popular scene and while the answer is "Rashi Thi", people are in splits. Over the weekend "Rashi" was trending on Twitter but it is the memes we cannot get over yet! Help! This Musician Made a Song Out of Saath Nibhaana Saathiya 'Rasode Me Kaun Tha' Clip and We Can't Stop Playing It (Watch Video).

Saath Nibhana Saathiya has been a haven for funny memes and jokes. Right from Gopi Vau washing the laptop scene to Kolilaben's iconic Dhum Ta Na Na Na expressions, we have been blessed with some of the best memes templates from the Star Plus Daily. However, this Rasode me kaun tha meme seems like it is here to stay. Take a look at some of the best ones if you are as clueless as the khali cooker jo Rashi ne gas pe chadha diye the:

This is Us RN!

someone please get this video out of my head i can’t stop thinking about #rashi ne khali cooker gas pe kyun chada diya pic.twitter.com/qIsR4LhuJQ

She: He's probably thinking about other girls.

Hey! Cookers Have Feelings Too

No, Seriously, Which Genius Made This?

Yes, A Leonardo Dicaprio Kokilaben Crossover we Had No Idea We Needed

Kokilaben: *Going to take a Bath*

After knowing rashi was there in the kitchen#kokilaben to #rashi : pic.twitter.com/x3JDKPQ392

#kokilaben to #rashi who put khali cooker on Gas : pic.twitter.com/pZwipHKhtV

Here's The Song That Gave birth To Kokilaben's 'Rasode Me Kaun Tha?' Funny Memes and Jokes:

When TikTok existed in India, the same trend has taken over with people making hilarious videos on the Kokilaben's "Pohe banenge" dialogue with all "dhoom ta na na" and ish. It is majorly the fact that even the smallest of incidents are showcased with MASSIVE drama that garners all the attention. Not to mention, Kokilaben's *scary* expressions are a perfect meme material as well.

(The above story first appeared on LatestLY on Aug 23, 2020 01:36 PM IST. For more news and updates on politics, world, sports, entertainment and lifestyle, log on to our website latestly.com).