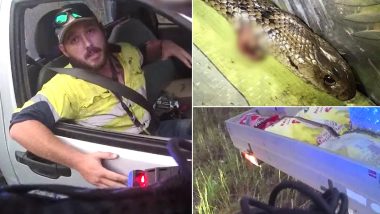 An Australian man bravely fought off a snake, that too among the most deadly ones when he was driving a truck on a highway. Jimmy from Gladstone was driving on the Dawson Highway west in central Queensland when he came across a brown snake in the truck. And as he tried to apply the brakes to halt, the snake started to wrap itself around his legs. Jimmy used a knife to fight off the snake as he struggled to bring the truck to a halt. Fearing he himself would die from the snake bite, Jimmy managed to kill the snake and rushed to the nearest hospital. Florida Snake Hunter Catches Giant Man-Eater 17-Foot Python After a Bloody Battle (Watch Terrifying Pic and Video).

The eastern brown snake is among the world's most venomous snakes and one that causes most snakebite deaths in Australia. Jimmy was driving when on the highway when he saw the deadly snake, which rose through the gear stick. He was driving at 100 kmph when he saw the serpent and wanted to halt, but the snake started wrapping his legs. With a knife that he had for work, he struck the snake at the same time trying to stop the vehicle in speed. Seeing him speed, police officers pulled him over. They learnt about the incident and checked, they saw a dead snake in the tray of the truck. A video of the scary snake encounter has been shared on Facebook and is going viral. Snake-Man Wrestling: Video Shows Drunk Youth Fighting Reptile Despite Getting Repeatedly Bitten.

The police rushed to call paramedics for help, but luckily Jimmy wasn't bitten but he was in shock. "It was pretty terrifying, I’ve never been so happy to see red and blue lights," Jimmy said in a report. An eastern brown snakebite is very harmful and their venom is fast-acting. It can cause paralysis and bleeding in the brain, proving fatal if not acted fast enough. So it is no wonder that Jimmy went in shock at the sight of this deadly reptile.

(The above story first appeared on LatestLY on Jul 07, 2020 06:51 PM IST. For more news and updates on politics, world, sports, entertainment and lifestyle, log on to our website latestly.com).