Netflix Warns Viewers Against Viral #BirdBoxChallenge; Urges People Not to 'End Up Hospital Due to Memes' 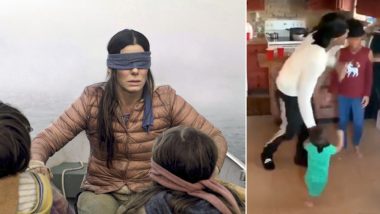 Netflix movie 'Bird Box' seems to have not just glued viewers to the screen, but also inspiring them to do things. With so many positive reviews coming up, memes and jokes on Bird Box have gone viral. And fans inspired by the movie are attempting the #BirdBoxChallenge and running blindfolded into traffic and even making their kids do the same. One of the videos shows a kid running into a wall while performing with the challenge with adults.

And now Netflix has urged fans to not participate in #BirdBoxchallenge that is grabbing eyeballs on social media. Bird Box is a post-apocalyptic psychological thriller, directed by Susanne Bier. Sandra Bullock plays a mom who wears a blindfold to avoid seeing a mysterious creature or force which induces suicidal tendency in people. She also ties the blindfold on her two children and goes through dangerous terrain.  ‘Flaunt Your Wealth’ Instagram Challenge Goes Viral in China! Rich People Going to Rags Again to Show Off.

Here are videos of people attempting the #BirdBoxChallenge:

People wear a blindfold in the movie to avoid being possessed by the creature which makes one kill themselves. Humans use their other senses to move around.

When you’re not allowed to see but you can’t skip legs! #BirdBox #BirdBoxNetflix #BirdBoxChallenge pic.twitter.com/miUPquHg6i

Why you should not accept the #BirdBoxChallenge:

As the challenge went viral, Netflix issued a warning on Twitter telling people to not end up in the hospital attempting it.

A Auntie journey is never to easy #birdbox #BirdBoxChallenge pic.twitter.com/ptWebr0KQ1

Netflix's tweet reads, "After the challenge went viral, Netflix issued a warning to viewers about Bird Box, writing, "Can't believe I have to say this, but: PLEASE DO NOT HURT YOURSELVES WITH THIS BIRD BOX CHALLENGE. We don't know how this started, and we appreciate the love, but Boy and Girl have just one wish for 2019 and it is that you not end up in the hospital due to memes."

Can’t believe I have to say this, but: PLEASE DO NOT HURT YOURSELVES WITH THIS BIRD BOX CHALLENGE. We don’t know how this started, and we appreciate the love, but Boy and Girl have just one wish for 2019 and it is that you not end up in the hospital due to memes.

Multiple times in the past, Netflix lovers have come up with different challenges inspired by their shows. The last one that went massively viral was Invisible challenge where people trolled their siblings making them believe they got vanished. The challenge got viral after a video part of the Netflix series Magic for Humans was released on YouTube in August.

(The above story first appeared on LatestLY on Jan 03, 2019 10:47 AM IST. For more news and updates on politics, world, sports, entertainment and lifestyle, log on to our website latestly.com).