After the allegations of abuse Bhad Babie placed on the 'Troubled Teen' centre she had given some time to Dr Phil to apologise for it. However, in response to the interview where Dr addressed the abuse allegations about the turn-about Ranch's "troubled teens" facility in Utah, Bhad Bhabie released a video firing Dr Phil. 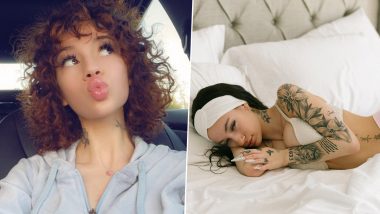 It all started back in March when Bhad Bhabie shared an eight-minute video titled "Breaking Code Silence" talking about the alleged abuse she says she received while she was at Turn-About Ranch following after the 2016 Dr Phil Show appearance. However, reiterating her allegations, in the new video, Bhad Bhabie (Bregoli) went through a number of the claims Phil made during his Banfield Show interview, offering a dispute for each.

“Malnourishing, humiliating, screaming at, sleep-depriving—that’s not fucking tough love,” she said in the new eight-minute video. Bregoli criticized the interview’s set-up, noting they focused on the sleep-deprivation accusation she made and largely ignored the additional details. She also said she’s been made aware of suits against the facility involving what she described as murder, sexual abuse, and torture. Speaking specifically on Phil’s claim of no direct involvement with the facility and a lack of feedback, Bregoli said Phil wasn’t being honest.

Are you fucking nuts?” she said Wednesday. “Are you actually fucking nuts? I’m really trying to keep my composure. These two are really not making it easy.” According to Bregoli, her mother signed a consent of release of information agreement in which it was required that progress reports be sent directly from Turn-About Ranch to Dr. Phil Show.

“So when you say that you don’t have any fucking feedback from them, that is not true!” she said. “So if you’re saying you don’t have any feedback, maybe you should be getting feedback about these places before you’re just sending multiple people’s fucking kids here. You’re just trying to save your ass. That’s all you’re trying to do is save your ass. But there’s too many stories and there’s too many people behind this that you can’t save your ass anymore.”

Bregoli turned 18 on March 26 — just one week before launching her account. Her 18th birthday Instagram post was flooded with comments asking when she’d join OnlyFans. Her rush to get on the platform and the comments encouraging her to do so have been a major source of backlash.

“Saw your 6 million comments and now i’m answering your call … we breaking all the rules ” she wrote in an Instagram caption, suggesting that there were millions of comments from interested parties.

(The above story first appeared on LatestLY on Apr 08, 2021 10:15 AM IST. For more news and updates on politics, world, sports, entertainment and lifestyle, log on to our website latestly.com).