A paraglider had to be rescued after he flew into power lines and got trapped in the wires for more than three hours in California. 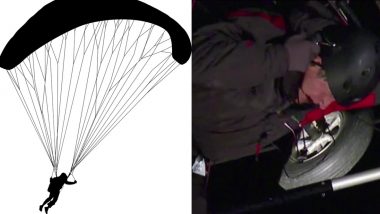 Adventure sports may give you the adrenaline rush you need but at the same time, it is dangerous. A paraglider had to be rescued after he flew into power lines and got trapped in the wires for more than three hours in California. He got entangled in the power lines on Wednesday afternoon while trying to land near the Yuba County Airport in Olivehurst in California, the Yuba Country Sheriff's Department said in a news release. Siberian Husky Goes Paragliding 3,500 Feet Above Ground With Its Human in Manali! (Watch Video)

A local resident who witnessed the incidentJimmy Comstock told CNN affiliate KTXL that he saw two paragliders in the sky. They separated and one of them flew straight into the power lines. He was quoted as saying, "I seen two of them coming. One went that way and the others come over the trees, dipped down in the road then tried to get out of the road and then hit the wires." Paraglider Meets Accident in Himachal Pradesh, Mohali Tourist Killed.

After learning about the incident, The Pacific Gas and Electric Company turned off all the power lines in the area to prevent him from being electrocuted. Soon, rescuers reached the spot and began efforts to get him down. Olivehurst Fire Battalion Chief Randy York told CNN affiliate KTXL, "Our main focus was letting him know to stay in contact with the aircraft, not to try to reach out, touch us or move around as much so that the aircraft stayed still and wouldn't potentially fall."

Paraglider Rescued After Flying Into Power Lines in California:

Rescuers said that the pilot was conscious and could communicate. Paramedics then transported him to a hospital where he is under medical care. The US Hang Gliding and Paragliding Association says that the sport is as safe - or dangerous - as other action sports like mountain biking, skiing and climbing. It depends on a person's preparation or experience how they will be able to excel in it. Two of its current or former members died from the sport in 2018 and seven died in 2017.

(The above story first appeared on LatestLY on Feb 23, 2020 11:00 AM IST. For more news and updates on politics, world, sports, entertainment and lifestyle, log on to our website latestly.com).