A pet python named Monty managed to swallow a whole beach towel and the vets at Small Animal Specialist Hospital had to deal with one of their rare cases. They even managed to make a video of the operation wherein they pulled out the entire towel from the 10-feet-long python's throat. 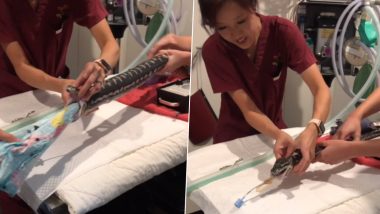 Vets in Sydney had to pull out a three-metre long cloth from a python! A pet python named Monty managed to swallow a whole beach towel and the vets at Small Animal Specialist Hospital had to deal with one of their rare cases. A video of the operation showing two doctors pulling out the entire towel from the 10-feet-long python's throat has gone viral. They posted the video on Facebook calling it an unusual and extraordinary case. Is This The World's Biggest Burmese Python? Meet 18-Foot-Long Pet Snake Hexxie From England Who Lives With Another Serpent and a Dog (Watch Video).

Monty is an 18-year-old jungle carpet python who had to be rushed to the hospital after it swallowed a beach towel. The doctors had to perform an endoscopy and using long forceps they pulled out the towel. The SASH mentioned in their Facebook post, "Once we, had a good grip, the towel was able to be carefully removed from the gastrointestinal tract with endoscopic guidance." They added a subtle humour as they added, "It was smiles all round and we're happy to report that both Monty and the beach towel have lived to see another day!" Python Eats a Crocodile! Photographer Captures Incredible Pictures of the Attack in Queensland, Australia (View Pics).

The towel was so inside the body of the snake, that it started just a metre away from the reptile's head. Monty was discharged from the hospital on the same day and the owners confirmed that the snake was doing well. Although it is not clear how the owners missed seeing that Monty had swallowed an entire towel. And said they were unaware of his unusual eating habits.

(The above story first appeared on LatestLY on Feb 28, 2020 05:33 PM IST. For more news and updates on politics, world, sports, entertainment and lifestyle, log on to our website latestly.com).