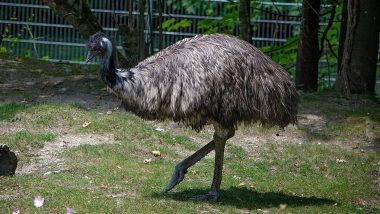 A pet emu has been on the run since a week in South Yorkshire, England. Authorities have been trying to get hold of the bird named Ethel who has run away from five days with no luck. There have been numerous reports of sighting of Ethel across Doncaster around parks but she has managed to elude capture. Ethel is talk of the South Yorkshire these days as locals spot her roaming around.  Meanwhile, the owner is making a desperate plea to leave her alone so she hopefully, safely returns home. Missing Dog Walks Into Police Station to Report Himself and Then Returns Home, 'Good Boy' Impresses Netizens.

Ethel has fled her home last week after some passerby took her photographs. The bird has been so spooked she's running away from most people, even the rescue team making an effort to catch hold of her. She has been sighted more than a dozen times in parks nearby but eluded capture. Meanwhile, the owner Keery Dobson is making a desperate appeal to leave her alone, as some people even threw stones at this long-limbed bird. He has told Daily Mail, "She's had stones thrown at her and all sorts, she's not used to being out she must be terrified." He added that they have been in touch with the rescue officials but she is too scared to come near anyone. Drought in Australia Leads to Emu Invasion in Some Cities.

The RSPCA and police officials have been bombarded with calls about the sightings but there is no way to reach Ethel safely. Ethel is running off with speed and RSPCA hopes they will manage to catch it in an enclosed area. Dobson, the owner is keeping a tab on all the recent sightings and just hopes she will return home safely. Someone recently saw it about a mile away from their home, so hopefully, she will return soon. This reminds us of another such incident from North Carolina where the bird was on the run for five weeks. There were several appeals on social media to get hold of this one too.

(The above story first appeared on LatestLY on Aug 10, 2020 09:04 PM IST. For more news and updates on politics, world, sports, entertainment and lifestyle, log on to our website latestly.com).