Shreya Ghoshal Day 2021: Here’s Why Shreya Ghoshal Is Trending on Twitter; Singer Thanks Fans for Making the Day Special Every Year 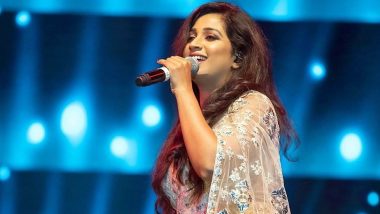 Thank you for making it special every year! SHREYA GHOSHAL DAY is your day! Feel humbled 🤗 https://t.co/w6RwWdY1Ii pic.twitter.com/ixcoEWgBiT

Check Out the Tweets of her Fans on Shreya Ghoshal Day:

@shreyaghoshal has been honoured by the United States state of Ohio, where Governor Ted Strickland declared 26 June 2010 as "Shreya Ghoshal Day"

Her voice is so soothing 🦋✨

The Day for the Diva

Finally the day of our mellifluous DIVA @shreyaghoshal 's day has arrived 💫💗 #TeamShreya Wishes you all a HAPPY SHREYA GHOSHAL DAY te day of pure of melody to bless your ears♥️ pic.twitter.com/nBy7g3D2e5

🥰 Have a Shreyacious Year Ahead

(The above story first appeared on LatestLY on Jun 26, 2021 10:51 AM IST. For more news and updates on politics, world, sports, entertainment and lifestyle, log on to our website latestly.com).