Snake Swallowed an AK-47? Creepy Photo of Giant Reptile is Going Crazy Viral on Social Media And Netizens Are Questioning Whether Its Fake or Real!

While there are some snakes which are known to strangle and swallow their prey, this one seems like an image crafted for fun. We do not know the reliability of this picture but the reactions on it are quite funny. 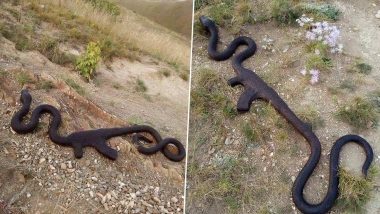 We have heard and read of snakes being found in bizarre places, and come across some disturbing snake photos. And now a picture that appears like a snake has swallowed an AK 47 has come up online. Netizens are always amused by something that isn't regular, so this picture is also going viral. We do not know the source of where this picture is taken from but it is almost a 5-month old photo that has resurfaced again and doing viral. A lot of people are wondering if the picture is real at all or some real good editing done here. Hungry Snake Eats Itself, Swallows Almost Half of Its Body (Watch Rescue Video).

The internet has such a huge collection of bizarre images and pictures that you cannot even predict what you will see, the next time you are scrolling on social media. This snake swallowing on an AK-47 is one such picture that has caught fancy. The picture was shared on Twitter by a user @paeh_judin and it has got over 13,000 retweets and 11,000 likes in a day. When one of the users even asked a hoax buster site to confirm its authenticity, even they made a smart pun on the picture. Venomous Snake Eats Another Snake As Wild Wasp Attacks in Florida, Video Goes Viral.

Here's The Viral Picture of Snake Swallowing an AK-47:

Some people were wondering if it is fake or real, while others had some funny reactions too. Check some of the reactions on this viral image.

How Does it Sound

Sooo does it hisss or ratatata?😂

Hahaha! Is This Russia?

What a Weapon Upgrade!

While there are some snakes which are known to strangle and swallow their prey, this one seems like an image crafted for fun. We do not know the reliability of this picture but the reactions on it are quite funny.

(The above story first appeared on LatestLY on Jan 28, 2020 08:05 PM IST. For more news and updates on politics, world, sports, entertainment and lifestyle, log on to our website latestly.com).