The adrenaline junkie who is from Texas suffered injuries to his leg during a base jump. 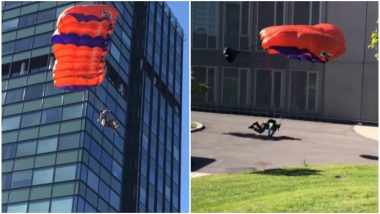 Base jumps have become popular in the recent years with more and more people attempting it. While it gives you an adrenaline rush, it can be dangerous if the right precautions and measures are not taken. An adrenaline junkie from Texas, John Michael suffered injuries to his leg during a base jump and crushed both his legs as there was a landing trouble.

A video going viral on social media shows John flying with a parachute some feet above ground, but suddenly he goes haywire and falls to the ground. John was attempting a building base jump in Norway when he fell. Woman Falls Through the Ceiling of a Mexican Restaurant in California after Asking to Use the Washroom; Claimed to Be on Drugs (Watch Video).

After seeking permission from the manager of 'Forum Jæren' in Bryne, Norway, the highest building in the area, he took the fall. John took permission for the jump from the 19-floor-high building on June 26 and the jump was scheduled for another day.

Here is the video of the incident. (Viewer discretion adviced)

While the initial seconds of the jump looked smooth, a heavy wind made things end badly. Despite wearing a parachute, John crushed both of his legs and had to be rushed to the hospital in Stavenger. He is currently recovering in a hospital. Last month, in an unfortunate incident, a man died while base jumping in the Swiss Alps. He died during a jump in the Lauterbrunnen Valley. The man had started base jumping in 2015 and had taken part in more than 175 leaps.

(The above story first appeared on LatestLY on Sep 20, 2018 07:13 PM IST. For more news and updates on politics, world, sports, entertainment and lifestyle, log on to our website latestly.com).

Comments
Tags:
adrenaline rush base jump Base jumper base jumping John Michael Norway
Comments
You might also like