Thailand: Python Snake Strangles a Monkey to Death While More Than 20 Other Monkeys Tried to Save Their Friend (Watch Viral Video) 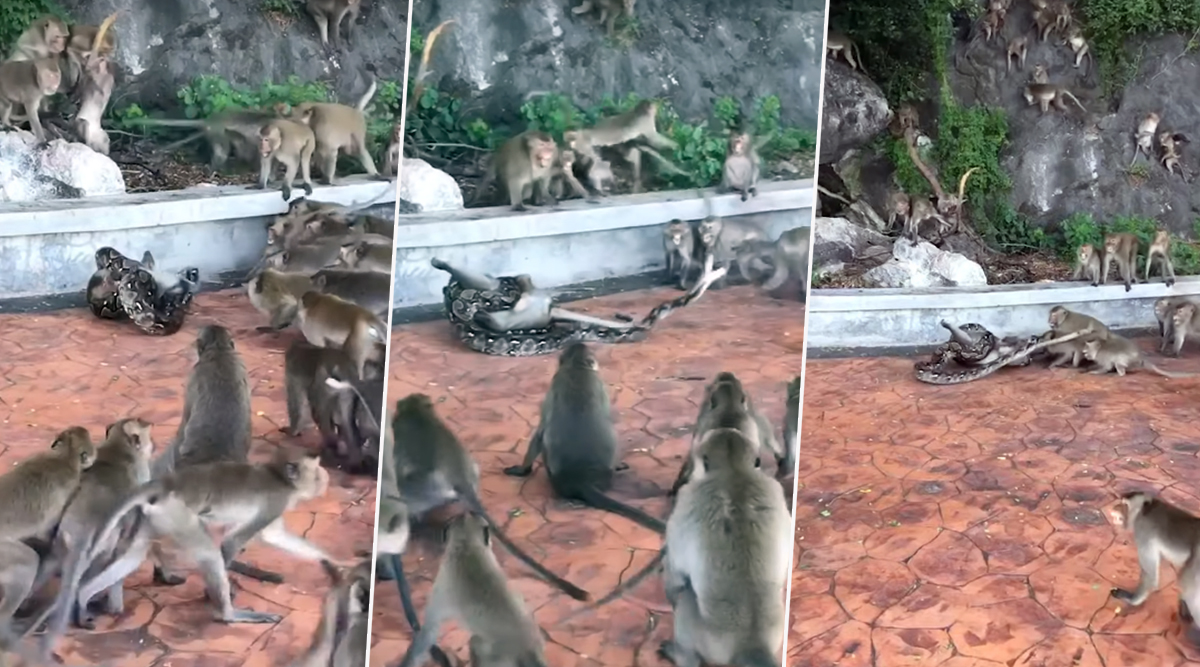 A heartbreaking moment of a monkey losing its life to a python attack while its friends tried their best to save it has come up online. The footage is from Thailand's Prachuab Khiri Khan where a primate got trapped into the hold of a python. The snake coiled fiercely around the monkey until it ran out of breath. And as the python coiled itself, a troupe of over 20 monkeys surrounded the snake and tried to free their friend. The ensuing battle was captured on video and shared online. The video is now going viral. Frog Kills Snake At a Village in Karnataka, Watch Shocking Video.

The incident took place last week in the southern province of Thailand. The video shows the python strangling its prey and tightening its grip. An entire group of monkeys tried to save their friend but whenever one of them got close to the snake, it would show its bare fangs and scare them all away. At one point even an elderly man tried to intervene and put the snake away but to no avail. But eventually, the python left the dead monkey there and slithered away. 13-Foot-Long Rock Python Swallows Stray Dog in 14 Seconds in Udaipur (Watch Video).

Watch Video of Python Strangling Monkey to Death in Thailand:

One of the tourists who was visiting the area when this incident occurred told DailyMail, "It was touching to see monkeys help his friend from dying but I felt so sorry for them, because they could not have saved their friend. The python killed the monkey then left. I don't think the area was quiet enough for him to try and eat it."

In this case, the python may have proved stronger but the monkeys could take revenge for the death of a member of their clan. Such an incident was recorded at Munger in Kharagpur, West Bengal. The villagers found a 6-foot python lying dead in one of the gardens and apparently the monkeys had killed it using a big stone. It is indeed heartbreaking to see in the above incidence how an entire troupe tried hard to save their member but failed.