The Commerce Department announced Friday morning about the latest update and following this TikTok users are having a hard time to process this. Their instant reactions have come in the form of funny memes and jokes on Twitter. 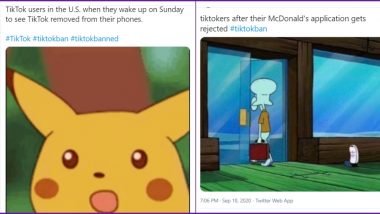 TikTok users in US have a difficult start to the weekend as Donald Trump's government is about to issue an order that will bar the citizens from downloading or using the app. TikTok and WeChat will no longer be available for download on the US app stores from September 20. The move is taken concerning the security measures regarding data of the users by parent company ByteDance. The Commerce Department announced Friday morning about the latest update and following this TikTok users are having a hard time to process this. Their instant reactions have come in the form of funny memes and jokes on Twitter. Netizens are poking fun at the TikTok users who are already missing the app.

The news about banning of the China-based video making app has been doing the rounds from past few months. At the early start of last month, US President Donald Trump had announced about signing an executive order to ban TikTok. Similar reactions of funny memes coping up with loss of the app were trending on social media. With the latest update that gives a final date of the ban going into effect starting Sunday, netizens are upset. The reactions have come in the form of funny memes, hilarious GIFs and jokes on how they will cope up with their favourite app now gone.

Check The Reactions on TikTok Ban in US Here:

Ready for a Meltdown

TikTok users in the U.S. when they wake up on Sunday to see TikTok removed from their phones.#TikTok #tiktokban #tiktokbanned pic.twitter.com/uXe8EpoacW

McDonalds going through all of it's job applications #tiktokban pic.twitter.com/VchLr0YtfK

tiktokers after being forced to work a 9-5 after the #tiktokban pic.twitter.com/SbfOC21srq

Chinese company ByteDance is seeking to seal a deal that will seek make US partner to Tiktok in order to avert a ban. As per reports, the Beijing-based company plans to keep a majority stake in Tiktok's global business and create headquarters in the US. Unless there are any final updates about this deal, TikTok users in US will have to be prepared to bid a goodbye to their favourite app.

(The above story first appeared on LatestLY on Sep 18, 2020 07:32 PM IST. For more news and updates on politics, world, sports, entertainment and lifestyle, log on to our website latestly.com).