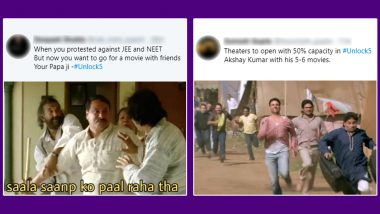 The much awaited news about opening up of malls, cinema halls, schools and colleges reopening is here as the Centre gave out details about Unlock 5. The fifth phase of reopening will come into effect from October 1. In this, cinema halls, theatres and multiplexes are allowed to reopen with 50 percent seating capacity from October 15. There will be more activities restarting in the non-containment zones. That is indeed a respite for many who have been waiting to step out. But it still remains a concern that the cases in the country are on a rise. Meanwhile, #Unlock5 has started trending on Twitter with instant reactions in the form of funny memes and jokes. Unlock 5 Guidelines: Cinema Halls, Entertainment Parks to Reopen, States Allowed to Open Schools From October 15, Parents' Consent Mandatory.

Each set of new restrictions has seen memes and jokes from netizens. In the start we saw similar trend every time there was a news about the extension of lockdown. As things are finally opening up gradually, people have expressed their happiness using the set templates of memes and jokes. As soon as the latest guidelines were announced, funny memes and reactions were up on Twitter.

Check Some Funniest Ones Here:

Theatres to open in unlock 5 with 50% occupancy. #Unlock5

Akshay Kumar with his 4 movies : pic.twitter.com/PKVm6ddEB2

Meanwhile me who have already decided to Boycott Bollywood pic.twitter.com/vwSdUHmVEb

When you protested against JEE and NEET

But now you want to go for a movie with friends

The guidelines have just been issued, so we are likely to see more of the memes and jokes throughout the night. If you are excited about the new guidelines and planning to meet up with friends, we would still advise you to stay careful, as the cases are on a rise and that definitely cannot be ignored. It is Unlock 5 but you need to Stay safe!

(The above story first appeared on LatestLY on Sep 30, 2020 09:36 PM IST. For more news and updates on politics, world, sports, entertainment and lifestyle, log on to our website latestly.com).