US News Anchor Reports on Her Own Daughter’s Death Due to Drug Overdose in a Heart-Breaking Video! Watch Other Instances of Brave Reporting 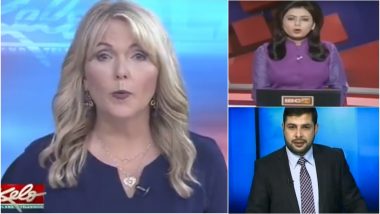 A veteran US news anchor from South Dakota reported death of her 21-year-old daughter who died of overdose on fentanyl, three days ahead of a scheduled intervention, in a desperate plea to end the opioid crisis. On Wednesday, journalist Angela Kennecke, 52, took to the air on CBS affiliate Kelo-TV to share of her daughter Emily’s death in May, as reported by DailyMail. She began the broadcast by saying: “We have brought you many reports on the opioid crisis but now, the opioid epidemic has hit home in a tragic and devastating way for me personally.” MSNBC Anchor Rachel Maddow Cries on Live TV While Reading News of Migrant Toddlers Sent to 'Tender Age' Shelter.

Emily died on May 16 and the anchor chose to share her story about her daughter in hopes of raising awareness about the opioid crisis. In the special segment she said, “Because if just one person hears me, if just one person does one thing to save a life, then I don’t care about a million naysayers or people who don’t understand. I just care about that one mother that I can stop from experiencing the pain that I have.”

Watch Video of News Anchor Sharing Her Own Daughter’s Death

I'm issuing a personal plea to end the stigma surrounding addiction and a call for action regarding the opioid crisis! pic.twitter.com/Ayxlf43UQm

Emily had struggles with drug addiction for more than a year but Kennecke was horrified to learn that she’d been shooting heroin, as reported by New York Post. Emily’s autopsy revealed that she had six times what would be considered a dose of fentanyl of a large man, according to her mom. In the clip, Kennecke said, “She was just a small young woman. She didn’t stand a chance. The fentanyl killed her almost instantly after she injected it.” Kennecke set up a fund called Emily’s Hope to raise money for addiction treatment for those who need it.

This is not the first time a news anchor has read out a devastating news of death of their own family member. Last year in India in the month of April, a senior anchor Supreet Kaur announced a car accident in the morning and when the details such as location and types of vehicles involved were revealed led her to believe her husband may have been a victim. She later learned after the broadcast that her husband had indeed died in the road accident.

And in another incident, a Yemeni news anchor had reported the death of his brother on the live show who was killed by Houthi rebels.

We cannot imagine the courage and bravery these news anchors would have needed to share such devastating news on a live show. The US anchor in the video said, “I consider myself a wordsmith, I write for a living every day, but there are no words to describe the devastation I feel at the loss of my daughter.” Before returning to work on Wednesday, the mother took to Facebook to describe the decision as the ‘hardest thing’ she had ever done in her career.

(The above story first appeared on LatestLY on Sep 10, 2018 12:16 AM IST. For more news and updates on politics, world, sports, entertainment and lifestyle, log on to our website latestly.com).

Comments
Tags:
Kelo-TV reporter shares her own daughter's death US news anchor video
Comments
You might also like