Valentine's Day 2021 Funny Memes and Jokes: From Bajrang Dal to 'Nibba Nibbi' on Feb 14, Hilarious Posts You Can Share with Your Single Friends

On 14 February, Valentine's Day is celebrated, which people consider as a festival of love. Couples in India give gifts, chocolates, etc. to their partners. But if you are not one of them, check out these hilarious memes! 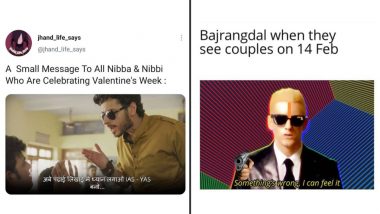 On 14 February, Valentine's Day is celebrated, which people consider as a festival of love. Couples in India give gifts, chocolates, etc. to their partners. Valentine day is named after a person whose name was a valentine. The beginning of the story of this love day is not filled with love. This story is about the encounter between a wicked king and a benevolent saint valentine. This day begins with the third century of Rome where there was a tyrannical king named Claudius.

Recently, after we rang the 2021 new year bell, hilarious posts took over Twitter and Instagram, mostly because people couldn't wrap their heads around how soon 2020 vanished and how we were already nearing Valentine's day but it is a reality now, in less than a couple of weeks you will be surrounded with mushy couples.

During Valentine's season on social media, it is either all the mushy posts that take over social media or straight up Bajrang dal memes. There is no in-between. But they always make you laugh out loud and legit nothing is better than that. So, you might want to check out funny memes and jokes about Valentine's day that is going viral on social media.

The funny memes on the celebration of love have actually been trending ever since the start of the month. The month of February brings with it an air of love and romance, as Valentine's Day is such a wide observance. It can honestly get annoying for a single person, because really, why do the couples need one day of love to celebrate their feelings for each other?

(The above story first appeared on LatestLY on Feb 11, 2021 04:30 PM IST. For more news and updates on politics, world, sports, entertainment and lifestyle, log on to our website latestly.com).