Video of a South Sudan Diplomat Urinating LIVE During an Online Panel Discussion on FB Goes Viral! Netizens Ask Him to Step Down (Watch Video)

A now-deleted video that went viral on social media saw a South Sudanese diplomat pee during a live Facebook political discussion. Ever since the action was caught on FB live in the United States it has sparked outrage with people calling what he did irresponsible and unacceptable. 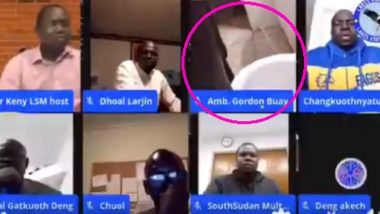 A now-deleted video that went viral on social media saw a South Sudanese diplomat pee during a live Facebook political discussion. Ever since the action was caught on FB live in the United States it has sparked outrage with people calling what he did irresponsible and unacceptable.  The man was seen urinating during the live Facebook political discussion by thousands of people and he's even being asked to step down because of this. In the meeting, the  Panelists were discussing the appointment of a governor for Upper Nile state when Gordon Buay who is said to be South Sudan’s deputy ambassador to the U.S., went ahead to the bathroom in only a shirt and urinated while all the other panellists saw him clearly. While the video was uploaded and then deleted from YouTube but somehow its copy is going viral on various social media platforms.

The video went viral and social media users couldn't help but ask Buay to step down. Buay was even accused of being intoxicated during the panel discussion. It was revealed in the video that he was even shouting at other panellists. Surprisingly he later also posted a message on his Facebook page asking people to not believe the viral video because according to him it was fake. Some panellists even appeared shocked to see Buay pee LIVE while some just smiled  and brushed it away.

You Can Watch The Video Here:

South Sudan's ambassador to the USA #GordonBuay urinates during a live zoom discussion panel. I am still speechless....

Couldn't he turn off his camera and mute his mic?🤦🏿‍♂️🤔 pic.twitter.com/bYgTSFp3lH

VOA’s South Sudan in Focus tried to reach out to Buay to which he didn't respond and now there may be some action taken against him. “Such kind of behaviour in line with diplomatic ethics has not happened anywhere in the history of international relations. So it is really shameful and is tainting the image of South Sudan and it should not be taken lightly in Juba,” James Okuk of the Center for Strategic Studies in Juba told South Sudan in Focus.

“Pretending to defend the government while naked and also trying to talk in a chaotic manner when he is drunk and then going to the toilet to pee without switching off the camera of the phone and coming back to defend saying there was nothing wrong. Something just really must be done,” Okuk further said.

(The above story first appeared on LatestLY on Jul 10, 2020 10:04 PM IST. For more news and updates on politics, world, sports, entertainment and lifestyle, log on to our website latestly.com).