The aquarium took to social media in a series of tweets, mourning the death of their beloved otter on Tuesday. 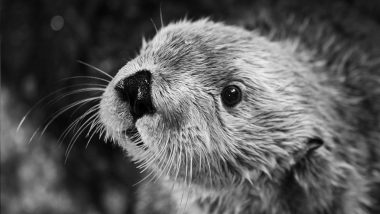 Charlie, the otter dies at 22 (Photo Credits: Aquarium of the Pacific ‏Twitter)

Charlie, the world's oldest southern sea otter has died in California at the age of 22. The otter died at the Aquarium of the Pacific in Long Beach. Charlie had celebrated his birthday last month by eating colourful seafood cupcakes. Male southern sea otters typically live 10 to 14 years in the wild. The aquarium took to social media in a series of tweets, mourning the death of their beloved otter on Tuesday.

Charlie was found stranded in Northern California in 1997 while being just a day old with the umbilical cord still attached. It is believed that the otter was orphaned because of the storms brought on by El Niño the year he was born. Charlie was initially taken to the Monterey Bay Aquarium. The aquarium staff and guests remember Charlie for his intelligence and easygoing disposition. It said that he would often be seen relaxing in the exhibit sucking on his paw. Best Wedding Proposal Picture: Cute Otters Photobomb UK Couple's Precious Moment, See Viral Photo!

It is with a heavy heart that we share the news that our sea otter Charlie passed away this morning.

Charlie turned twenty-two years old on March 2 and was the oldest living southern sea otter at any zoo or aquarium. pic.twitter.com/AVXib1g7Bn

Another tweet reads, "Charlie was selected for the study in part because of the behavioural training he had received at the Aquarium. Charlie learned to enter a specialized acoustic testing environment, listen for sound signals, and respond to the researchers, notifying them whether or not he had heard the sound by touching his nose to a target or remaining still."

Charlie had also part of a study on how animals perceive sound. By 22, it had started showing signs of ageing and also hearing and seeing problems. Charlie also had arthritis. California's sea otters are considered threatened. It is the hunting in the 18th and 19th centuries that nearly wiped them out. With various conservation efforts, the population has gradually increased, however, they continue to face pollution and habitat loss. The aquarium has invited those who loved Charlie to "fill out a card at the Aquarium in his memory that will hang from the railing at the Sea Otter Habitat all day".

(The above story first appeared on LatestLY on Apr 24, 2019 05:08 PM IST. For more news and updates on politics, world, sports, entertainment and lifestyle, log on to our website latestly.com).