Ashes 2021–22: David Warner Misses Out on Century But Puts Australia Firmly Ahead in First Test at the Gabba

Resuming from 113/1 at lunch, Warner continued to ride on his good fortune as he was dropped in the first over after lunch by Rory Burns at second slip. 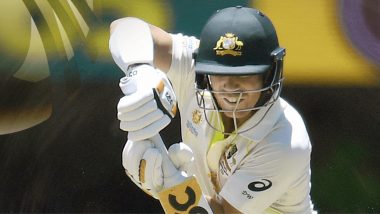 Brisbane, Dec 9: Australia, on the back of David Warner's unbeaten 94, find themselves firmly ahead in the first Ashes Test at The Gabba here on Thursday despite England taking out Marnus Labuschagne and Steve Smith in quick succession. At tea on Day Two, Australia are 193/3 in 54 overs, leading by 46 runs with Warner and Travis Head at the crease.

Resuming from 113/1 at lunch, Warner continued to ride on his good fortune as he was dropped in the first over after lunch by Rory Burns at second slip. Five overs later, Warner survived again on 60 as he slipped after trying to glance and Haseeb Hameed, at short leg, missed the run-out chance. The two missed chances helped Australia massively as Warner and Labuschagne registered the hosts into taking the lead while putting a stand of 156 runs for the second wicket. Ashes 2021-22 Schedule for Free PDF Download Online: Get Fixtures, Live Streaming, Broadcast in India, Time Table With Match Timings in IST and Venue Details of Australia vs England Test Series.

The breakthrough was provided by left-arm spinner Jack Leach, who after being lofted for a six on the previous ball, forced Labuschagne to go for the cut on a short ball with extra bounce. The right-hander failed to keep the cut down, slicing straight to backward point. Five overs later, Mark Wood was rewarded for his persistence as Steve Smith nicked behind to keeper Jos Buttler.

Earlier, under bright sunshine, Ollie Robinson struck an early blow to Australia by dismissing Marcus Harris, who pushed with hard hands to be caught by Dawid Malan at third slip. The defining moment of the first session came when Ben Stokes bowled Warner on 17 with an inswinger off his fourth ball, only

for the replays to show that it was a no-ball.

From that moment onwards, England were made to toil hard as Warner and Labuschagne went about their business of scoring runs with edges falling short of slip cordon. The duo went after Leach, who gave away just one run from his first over, amassing 30 runs off his next two overs. Warner hit him for two sixes in the 27th over. Labuschagne too hit Leach for a four and six before reaching his half-century with a cut through backward point off Chris Woakes in the next over.

(The above story first appeared on LatestLY on Dec 09, 2021 11:26 AM IST. For more news and updates on politics, world, sports, entertainment and lifestyle, log on to our website latestly.com).