Mohammad Nabi and Richie Berrington should be named as captain and vice-captain of your Dream11 Fantasy team as both these players have been in exemplary form for their sides in this tournament. Afghanistan beat champions West Indies in their last match while Scotland won all three of their Round 1 fixtures. 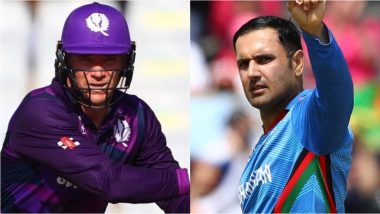 Afghanistan battle Scotland in a Group 2 Super 12 match on Monday, October 25. This game would be played at the Sharjah Cricket Stadium and is scheduled to begin at 7:30 pm IST (Indian Standard Time). As they enter to the Super 12 stage, Scotland have slowly turned out to be one of the most exciting sides in the competition so far, winning all three matches in the first round. They have sprung a surprise, defeating Bangladesh by six runs in their very first match in the competition this year. Afghanistan are also not very behind, having beaten defending champions West Indies in one of their warm-up matches. Both batting and bowling seems to be going well for them and they shall pose a real threat to Scotland's three-match winning run in the competition this year.AFG vs SCO Preview: Likely Playing XIs, Key Battles, Head to Head and Other Things You Need To Know About T20 World Cup 2021 Match 17

The captain of your Dream11 fantasy team of this match fetches double points while the vice-captain multiplies the points x1.5 times. Keeping that in mind, let us take a look at the recommended options for the captain's and vice-captain's slots for this game.

The Afghanistan captain, who is also one of the most experienced players on his side, is a good choice for the captain's slot of your Dream11 Fantasy Team for this game. He has been in terrific form, as seen in the warm-up games and his contribution with both bat and ball would once again be key for Afghanistan if they have to get off to a good start in the T20 World Cup 2021. AFG vs SCO Preview: Likely Playing XIs, Key Battles, Head to Head and Other Things You Need To Know About T20 World Cup 2021 Match 17

Richie Berrington has been one of the reasons why Scotland have done so well in the tournament so far. Berrington scored a useful 70 runs against Papua New Guinea in their last Round 1 match to set up Scotland's win and he would be one of the key performers for his team in this match.

(The above story first appeared on LatestLY on Oct 24, 2021 11:37 PM IST. For more news and updates on politics, world, sports, entertainment and lifestyle, log on to our website latestly.com).