Ahead of KKR vs RCB IPL 2018, Here’s a Look at Dinesh Karthik’s Captaincy Record in T20s 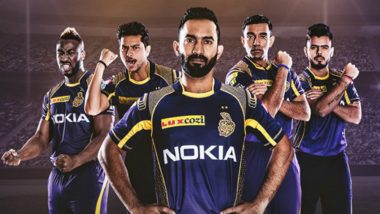 Once Kolkata Knight Riders (KKR) finalised their squad for Indian Premier League (IPL) 2018, it left everyone guessing who will captain the side? Players like Robin Uthappa, Dinesh Karthik, Chris Lynn and Sunil Narine were assumed to be the front-runners for the captaincy job and out of these players Karthik was eventually handed the responsibility of leading the side. Karthik is now all set to lead KKR in their opening match against Royal Challengers Bangalore (RCB). KKR open their campaign at Eden Gardens in front of the home crowd and Karthik couldn’t have asked for a better venue to start his stint with KKR. KKR vs RCB, IPL 2018 Preview

Earlier, at the IPL auction in Bangalore KKR picked Karthik for INR 7.4 Crore. If KL Rahul, who was bought by Kings XI Punjab for INR 11 Crore, does not keep wickets for his side, then Karthik will become the most expensive wicketkeeper picked at the IPL 2018 auction. Meanwhile, Karthik replaces Gautam Gambhir as the KKR captain. Gambhir, who led Knight Riders to two title wins, was picked by Delhi Daredevils at the IPL 2018 auction and is likely to captain the side. Uthappa, who was one of the candidates for the captain’s role, was named as Karthik’s deputy.

Karthik has led in IPL before as well. He has taken responsibility of Delhi Daredevils as a stand-in captain. He has also captained his state team Tamil Nadu in T20s and has an impressive record. In Tamil Nadu Premier League (TNPL), Karthik captained Albert Tuti Patriots and led them to a title win in the inaugural season. Under his leadership, the team finished runners-up in the second edition that is 2017. In both the seasons, Karthik was available only for select matches and captained the side whenever he played.

Dinesh Karthik’s record as a captain in T20s

Knight Riders will be the sixth franchise for Karthik in IPL. He has played for Delhi Daredevils, Kings XI Punjab, Mumbai Indians, Royal Challengers Bangalore and most recently Gujarat Lions.

Karthik is an experienced campaigner and has played 152 matches in IPL. He has 2903 runs under his belt and has 14 half-centuries to go with it. The right-handed batsman’s strike-rate is also a decent one and reads 125.94. Besides it, he has inflicted 114 dismissals (88 catches and 26 stumpings). IPL 2018 marks the beginning of new challenges for Karthik. Fresh from his impressive show against Bangladesh in the Nidahas Trophy final, Karthik will be eager to go out and lead from the front.

(The above story first appeared on LatestLY on Apr 08, 2018 02:35 PM IST. For more news and updates on politics, world, sports, entertainment and lifestyle, log on to our website latestly.com).