Ahead of MI vs DC IPL 2020 Final Clash, Here’s a Look at Mumbai Indians’ History in Indian Premier League Finals

Only Chennai Super Kings have played more finals in the tournament history than Mumbai Indians, but their record in the ultimate encounter is better than the MS Dhoni’s army. While CSK have won only three of their eight final clashes, Mumbai won four of the five times in the fight for supremacy. 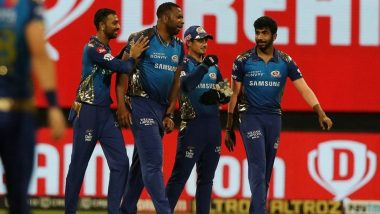 Intending to lift their fifth and second consecutive Indian Premier League (IPL) title, Mumbai Indians are locking horns with Delhi Capitals in IPL 2020 final at the Dubai International Cricket Stadium on November 10 (Tuesday). Rohit Sharma’s men have been magnificent this season and are firm favourites come on to the top in the summit clash. From Quinton de Kock, Suryakumar Yadav to Kieron Pollard and Hardik Pandya, every batsman has runs under their belt mantle in the bowling department has been handled brilliantly by Jasprit Bumrah and Trent Boult. The two speedsters have spitted venom with the ball and rattled many potent batting line-ups. Apart from their sensational form, their previous experiences in high-voltage games will come on top. This will be MI’s sixth appearance in IPL finals while DC will step in the ultimate game for the very first time. As both teams Gold gear up for the ultimate clash, let’s look at how Mumbai Indians fared in their previous five IPL finals.3 Reasons Why Mumbai Indians Will Successfully Defend Their Indian Premier League Title.

This was Mumbai’s very first appearance in IPL finals, but it didn’t prove to be a pleasant one. Batting first at the Wankhede Stadium, Chennai Super Kings posted 168/5 thanks to a brilliant half-century from Suresh Raina. The then Sachin Tendulkar-led side got off to a terrible with opener Shikhar Dhawan dismissed for a duck. Apart from skipper Tendulkar, none of the batsmen got going as MS Dhoni, and Co registered a 22-run triumph. However, that proved to be Mumbai’s first and only loss in IPL finals.  MI vs DC, IPL 2020 Qualifier 1 Match Result: Mumbai Indians Demolish Delhi Capitals by 57 Runs to Book Final Berth.

Batting first in the Eden Gardens, Mumbai Indians were reduced to 16/3 as the ghosts of 2010 were haunting the Men in Blue. However, Kieron Pollard came to Mumbai’s rescue with a brilliant counter-attacking knock. Despite losing regular wickets at another end, the Caribbean attacked CSK bowlers and scored a 32-ball 60, guiding his side to a respectable total of 148/9. MI speedsters Lasith Malinga and Mitchell Johnson spitted venom with the ball in the second innings as CSK were restricted to 125/9 and Mumbai lifted their maiden IPL title. Mumbai Indians Predicted Playing XI for IPL 2020 Final.

Mumbai reached their third IPL final in 2015, and they again met their arch-rivals CSK. Riding on a brilliant half-century of Lendl Simmons and skipper Rohit Sharma, MI posted a mountain of 202/5 while batting first at Eden Gardens. CSK never really looked in the chase as Mitchell McClenaghan, and Lasith Malinga took wickets at regular intervals. As a result, Chennai were restricted to 161/8 and Mumbai tasted glory for the second time.

The only time MI didn’t meet CSK in IPL finals was in 2017 as the now-defunct Rising Pune Supergiant advanced for the ultimate clash. Jaydev Unadkat’s sensational opening spell dented MI’s top-order while batting first in Hyderabad. The likes of Rohit Sharma, Ambati Rayudu and Kieron Pollard also couldn’t make a mark. However, Krunal Pandya’s fighting 47-run helped Mumbai post 129/8. Momentum was on a roller coaster during Pune’s chase as Ajinkya Rahane and skipper were scoring runs brilliantly, but wickets were also falling at the other end. The equation eventually came down to RPS needing three runs of the final delivery. However, Daniel Christian could sneak a double as Mumbai emerged victorious by just one run.

With 3-3 IPL titles in the kitty, MI and CSK locked horns in 2019 finals intending to become the most successful team in the tournament’s history. After electing to bat first in Hyderabad, every top-order batsmen got starts, but none of them was able to play a significant knock. The likes of Deepak Chahar and Imran Tahir were also on the top of their A-game. Kieron Pollard, however, came to the side’s rescue once again as Mumbai mustered 149/8. Chennai also couldn’t make a good start with the bat as veterans like Suresh Raina, Ambati Rayudu and MS Dhoni were dismissed in single-digit scores. Shane Watson, nevertheless, stood as a lone-warrior despite a bleeding knee. His 80-run reduced the equation to Chennai needing two runs of the last ball. However, Lasith Malinga dismissed Sharduk Thakur with a brilliant yorker as Mumbai won by one run.

Notably, MI's confidence will be on seventh heaven when they take the field as they defeated Delhi Capitals as many as three times earlier this season. They'll indeed like to extend their dominance. At the same time, Shreyas Iyer's men must be at the peak of their prowess to lift upset Mumbai and lift their maiden title.

(The above story first appeared on LatestLY on Nov 06, 2020 11:37 AM IST. For more news and updates on politics, world, sports, entertainment and lifestyle, log on to our website latestly.com).