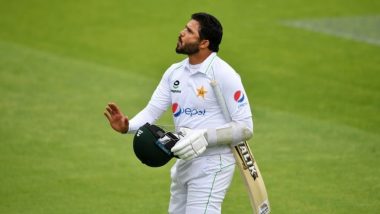 Azhar Ali continues to struggle with the bat in the second Test match between England and Pakistan which is currently underway at the Ageas Bowl in Southampton.  In the second game, he got out on 20 runs from 80 deliveries and as always the netizens were waiting to pounce on the Pakistani cricketer as they said that he missed his century by 80 runs. The netizens posted hilarious tweets with funny memes to troll the Pakistani cricketer. Azhar Ali’s wicket was snapped by England pacer James Anderson as the England pacer bowled outside off. Ramiz Raja Trolls England for Poor Fielding During PAK vs ENG, 2nd Test 2020, Former Cricketer Says, ‘England Maintaining Social Distancing From the Ball’.

The Pakistani batsman got edged and taken by Rory Burns and that brought in the second wicket of the game for the home team. With this, came in a stream of tweets which were aimed at Azhar Ali and they took a jibe at the cricketer for his dismal performance. While one of them posted a hilarious meme, another netizen said that he missed out on his century. Now, check out the tweets and the video of his dismissal below:

When Azhar Ali OUT on 20

Azhar Ali after he caught in Slips instead of his Usual "Walk LBW"#ENGvsPAK #EngvPak pic.twitter.com/kA9hwtrA8Z

As of now, the rains have obstructed the game and the scoreboard reads 85/2 in 33.5 overs. We have Babar Azam and Abid Ali are batting for Pakistan where the latter is one run away from reaching his half-century.

(The above story first appeared on LatestLY on Aug 13, 2020 08:07 PM IST. For more news and updates on politics, world, sports, entertainment and lifestyle, log on to our website latestly.com).