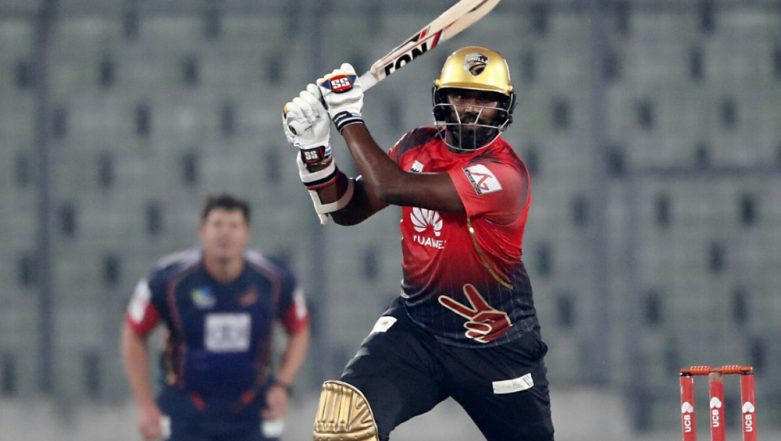 Thisara Perera continued from where he left in New Zealand as he made a grand entry in Bangladesh Premier League 2019 (BPL 2019). The hard-hitting left-handed batsman joined Comilla Victorians in the ongoing BPL 2019. Perera coming to bat in at number eight slammed 74 off just 26 balls. During his stay at the crease, the Sri Lankan all-rounder smashed three fours and eight sixes. BPL 2019 Schedule in PDF: Download Bangladesh Premier League 6 Full Timetable With Fixtures, Matches, Team and Venue Details.

Perera joined Victorians after their captain Steve Smith was ruled out due to an elbow injury. Batsman Imrul Kayes has since then taken charge of the side. In 2017 edition of BPL, Perera played for Rangpur Riders and helped them win the title as well.

The all-rounder has been in terrific form with the bat. Against New Zealand in second ODI, he almost single-handedly won his side a game after scoring impressive 140 off just 74 balls. He then followed it up with 63-ball 80 in the last ODI. In one-off T20I against the Black Caps, the all-rounder smashed 43 off 24 balls. BPL 2019: Nicholas Pooran Smashes 72 Off Just 47 Balls During Dhaka Dynamites vs Sylhet Sixers T20 Match, Watch Video

His breathtaking innings meant that Victorians, who at one stage were reeling at 86/5, posted a competitive total of 184/5 in their allotted 20 overs. However, Victorians failed to defend the total and lost the match by four wickets. Perera though had a horrible outage with the ball as he gave away 28 runs from two overs despite picking a wicket. With two wins and as many defeats, Victorians are currently placed fourth on the BPL 2019 points table.