Shaw's dismissal didn't deter Dhawan from playing his free-flowing game. Williamson rotated his bowlers but none of them were able to stop Dhawan's run-scoring spree. Rashid Khan, slog swept for a six by Dhawan in his opening over, broke the 52-run partnership by getting the left-hander caught at deep square leg while going for the sweep. 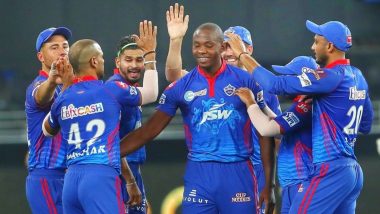 Dubai, September 22: Delhi Capitals produced an all-round performance to thrash Sunrisers Hyderabad by eight wickets at the Dubai International Stadium on Wednesday. After the bowlers kept Hyderabad to a below-par 134/9 in 20 overs, Delhi made an easy task of a chase of 135 with 13 balls to spare. The win also takes Delhi to top of the points table with 14 points from nine matches while Hyderabad remains at the bottom with just two points from eight matches.

Delhi's chase began well with opener Shikhar Dhawan picking boundaries on both sides of the wicket off Bhuvneshwar Kumar in the second over. Prithvi Shaw joined the party with boundaries against Khaleel Ahmed. But the left-arm pacer had the last laugh as he foxed Shaw with a slower delivery. Shaw's mistimed hoick was pouched by captain Kane Williamson taking a sensational catch by running back from mid-on.

Shaw's dismissal didn't deter Dhawan from playing his free-flowing game. Williamson rotated his bowlers but none of them were able to stop Dhawan's run-scoring spree. Rashid Khan, slog swept for a six by Dhawan in his opening over, broke the 52-run partnership by getting the left-hander caught at deep square leg while going for the sweep. DC vs SRH Highlights of VIVO IPL 2021.

Shreyas Iyer, playing a competitive match after six months, scored his first boundary of the night with a six dispatched over deep mid-wicket off Rashid Khan in the ninth over. Iyer smashed Sandeep Sharma for consecutive boundaries in the 14th over to keep the asking rate in check.

Rishabh Pant, who survived a run-out chance off Manish Pandey in the 16th over, smashed Bhuvneshwar Kumar with a pull over deep mid-wicket before taking a boundary through fine leg and a six over deep mid-wicket off Ahmed to take Delhi closer to the target. Iyer finished off things in style with a pull over long-on off Jason Holder to consign Hyderabad to their seventh loss of the tournament.

Earlier, Hyderabad had a horror start with David Warner out for duck off Anrich Nortje on third ball of the innings. Trying to flick towards leg-side, Warner got a leading edge caught by Axar Patel at point. Wriddhiman Saha (18) played some eye-catchy boundaries, including a six with a wristy flick over deep mid-wicket off Kagiso Rabada in the fifth over. But on the final ball, Rabada had the last laugh as Saha mistimed a pull and top-edge flew to Dhawan at mid-wicket.

Williamson (18) looked scratchy and was far from his best. After surviving two dropped chances in a span of five balls, Williamson tried to go big against Patel. But his loft came off the toe-end of the bat and was caught by Shimron Hetmyer at long-off running to his right. One brought two for Delhi as Rabada followed Manish Pandey (17) with a short ball angled towards the body. Cramped for room, Pandey tried to flick awkwardly. But the ball took the leading edge and Rabada moved to his right to complete an easy catch.

Nortje's return into the attack brought another wicket for Delhi, with Kedar Jadhav (3) trapped plumb in front of the wicket. Jadhav sought a review but couldn't reverse the decision. Hyderabad's problems increased as Jason Holder (3) drove straight to Shaw at cover off Patel. Abdul Samad (28) hit Rabada for a boundary on the first ball. But on the next ball, Rabada removed Samad with a short ball which he tried to pull, only for the top-edge to be pouched by Pant. IPL 2021 Orange Cap Holder List.

Rashid Khan cracked Rabada for a six sliced over backward point followed by a four with a top-edge over the keeper in the same over, collecting some crucial runs for his team. But Khan's bid to lend some respectability to the total was stopped by a run-out from Steve Smith. Pant's accurate throw on the final ball of the innings caught Sandeep Sharma short of the crease, bringing Hyderabad's innings to a close on a day when they couldn't break free from the sustained pressure by Delhi's bowlers.

(The above story first appeared on LatestLY on Sep 22, 2021 11:54 PM IST. For more news and updates on politics, world, sports, entertainment and lifestyle, log on to our website latestly.com).