Continuing his red-hot form, dashing opener Devdutt Padikkal registered his third successive century in Vijay Hazare Trophy. Chasing a potent target of 285 against Railways, the southpaw paced his knock to perfection and scored an unbeaten 145 off just 125 deliveries. 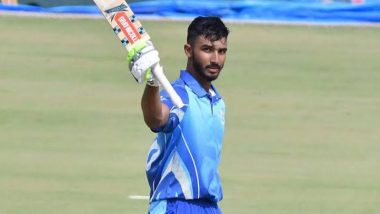 Continuing his red-hot form, dashing opener Devdutt Padikkal registered his third successive century in Vijay Hazare Trophy. Chasing a potent target of 285 against Railways, the southpaw paced his knock to perfection and scored an unbeaten 145 off just 125 deliveries. His opening partner and captain Ravikumar Samarth also scored a brilliant ton (130) as Karnataka comprehensively won the game by ten wickets and advanced to the semi-final of the season. Padikkal’s staggering consistency set Twitter on fire, with fans praising the 20-year-old youngster. While several highlighted his performances lately, many also batted for his inclusion in the national team. Devdutt Padikkal Registers Third Successive Hundred in Vijay Hazare Trophy 2021.

The Royal Challengers Bangalore (RCB) batsman has been nothing short of a nightmare for bowlers in the on-going season. After playing a decent 52-run knock in Karnataka’s opening game, Padikkal switched to his prime and tormented one bowling line-up after another. He missed out on a well-deserved ton, scoring 97, in his second game but didn’t put a foot wrong in his next three games. He scored 152, 126 (not out) and 145 (not out) as Karnataka finished the league stage at the top of Group C. Meanwhile, let’s look at how fans lauded Padikkal’s sheer brilliance.

He is the leading run-scorer of the tournament.

Royal Challengers hitting the groove in the lead up to the IPL!🤩

3rd consecutive century for Devdutt Padikkal in Vijay Hazare Trophy. What a season he's having, continuing from where he left last season. Outstanding performance by him, greats signs for RCB.

Yet another stunning performance from Devdutt Padikkal for Karnataka. 🤩

Notably, India will host England in five T20Is and three ODIs after the conclusion of the Test series. While Padikkal hasn’t been named in the T20I team, the ODI squad is yet to be announced. Although the home team has the services of Rohit Sharma and Shikhar Dhawan, ignoring the youngsters’ stellar show would be difficult for the national selectors.

(The above story first appeared on LatestLY on Feb 28, 2021 07:56 PM IST. For more news and updates on politics, world, sports, entertainment and lifestyle, log on to our website latestly.com).