Hardik Pandya also took to his official Instagram account and extended greetings for his MI teammate Ishan Kishan who turns 22. The all-rounder shared a throwback picture in which he can be seen lifting Kishan in a hilarious way. In fact, the star all-rounder also called Kishan ‘Chota Pandya.’ 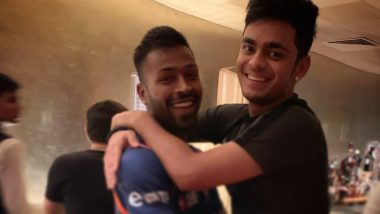 Mumbai Indians wicket-keeper batsman Ishan Kishan celebrates his 22nd birthday on Saturday (July 18, 2020) and wishes are pouring in for him from all over the world. On the occasion, Hardik Pandya also took to his official Instagram account and extended greetings for his MI teammate. The all-rounder shared a throwback picture in which he can be seen lifting Kishan in a hilarious way. In fact, the star all-rounder also called Kishan ‘Chota Pandya.’ Fans were nothing but delighted when they came across the cute picture as they filled the comment section in a jiffy. In fact, Pandya’s fiancee Natasa Stankovic also wished Kishan in the comment section. Ishan Kishan Birthday Special: A Look at Top Three Knocks in IPL by Jharkhand Wicket-Keeper.

“Happy birthday to our chotu Pandya,” read the caption of Pandya’s latest Instagram picture. Kishan and Pandya have played a lot of cricket together and are known to share a great bond too. Kishan, who led India to the finals in the Under-19 T20 World Cup, joined MI in 2018 and has been a vital part of the team since then. Meanwhile, let’s look at how the junior Pandya extended greetings to the wicket-keeper batsman. Hardik Pandya Shares Wonderful ‘Family’ Picture With Pregnant Wife Natasa Stankovic and Their Cute Pets.

Speaking of Pandya, the swashbuckling all-rounder, who announced the pregnancy of his fiancée Natasha last week, is set to become a father. Time and time again, the 26-year-old takes to social media and shares photo or video with his better half.

Meanwhile, BCCI is planning to host the 2020 edition of the Indian Premier League (IPL) in September-October. As per the latest reports, IPL 2020 is set to take place in UAE. However, BCCI still have to wait for the official confirmation of International Cricket Council (ICC) regarding the postponement of T20 World Cup.

(The above story first appeared on LatestLY on Jul 18, 2020 05:00 PM IST. For more news and updates on politics, world, sports, entertainment and lifestyle, log on to our website latestly.com).