Rishabh Pant starred with a spectacular hundred, a first by an Asian wicketkeeper-batsman in South Africa but India could only manage 198 runs, setting South Africa a 212-run target to chase and win the series. The visitors did get the wicket of South African captain Dean Elgar late in the day but would need plenty more of early wickets on Day 4 to remain alive in the game. 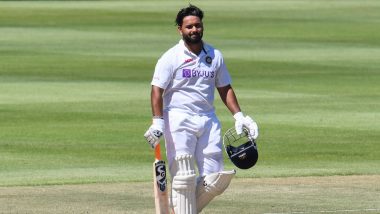 The third day of the third Test match between India and South Africa would surely go down as one of the most action-packed ones in the history of the sport. There was everything--disappointment, joy, celebrations, ovation and also some interesting chatter on the stump-mic. But above it all, what remained important was that South Africa finished at 101/2, still needing 111 more runs to win the game and the series. India on the other hand, need eight more wickets to have their hands on the Test series trophy. The start of the day completely went to Rishabh Pant and Virat Kohli and later, it was the former who turned out to be the star of India's second innings effort of 198 runs. Rishabh Pant Scores Fourth Test Hundred in India vs South Africa 3rd Test 2021–22 Test in Cape Town

A quick loss of veterans--Cheteshwar Pujara and Ajinkya Rahane dented India back early on but they had skipper Kohli strongly rooted to the crease. In walked Pant to join him and help India set a good target for South Africa. The left-hander mixed caution and aggression and proved every one of his detractors wrong--especially the ones who had slammed him for a poor shot in the Johannesburg Test--and got his name etched in the history books as the only Asian wicketkeeper-batsman to score a century in South Africa. He started off on an attacking note at first when Kohli was at the other end but later, brought the element of patience into his game, registering a historic knock that was 50% of what his team could get. Kohli fell to a ball outside the off-stump after he had been patient like a monk (29 off 143 balls) and a 94-run stand with Pant. After his dismissal, wickets kept falling at regular intervals. Virat Kohli’s Heated Comments on Stump Mic Evoke Angry Reactions From Netizens (See Posts)

Pant was left stranded at the other end as he tried his best to score runs while losing out of partners. He got to his hundred (100* off 139 deliveries) and soon after, the Indian innings folded for just 198 runs. South Africa in response, started off decently but Mohammed Shami once again got the better of Aiden Markram, with KL Rahul taking a good catch in the slip cordon. But South African captain Dean Elgar and Keegan Petersen displayed steely resolve and grit to put together 78 runs. Elgar was controversially adjudged 'not out' by the TV umpire even while the ball looked to be hitting the stumps (with the naked eye). Skipper Kohli did dish out some of his frustration at this decision by kicking the turf and also express dissent towards the broadcaster with KL Rahul also adding his share of thoughts. All of this was recorded on the stump mic. KL Rahul Caught Saying, ‘The Whole Country Is Playing Against 11’ on Stump Mic During India vs South Africa 3rd Test, 2021–22 (Watch Video)

But India did get the wicket of Elgar when the left-hander edged a ball while trying to flick it on the on-side. Pant took a good catch a review by India showed that the ball had touched the bat. That signalled the end of play on Day 3 with the match in a very delicately balanced situation.

Take a Look at Some Stat Highlights of the Day:

#Kohli also registered the lowest strike-rate by an Indian captain scoring more than 100 runs in a Test match (31.39)

#Marco Jansen now has got 19 wickets, the most by a Proteas bowler in a debut Test series.

A lot of action in this Test match awaits cricket fans on Day 4. South Africa need 111 runs, India require eight wickets. Who is going to get the win? Stay tuned to find out!

(The above story first appeared on LatestLY on Jan 13, 2022 11:22 PM IST. For more news and updates on politics, world, sports, entertainment and lifestyle, log on to our website latestly.com).