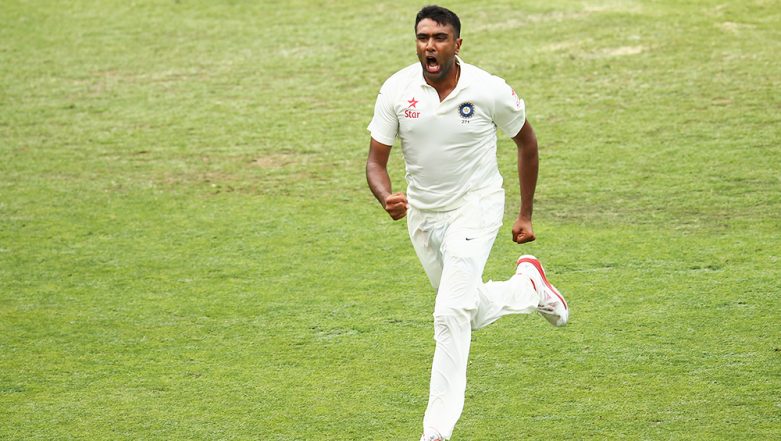 Sydney, January 2: In a bid to return to the playing XI for the fourth and final Test at the Sydney Cricket Ground, starting Thursday, India's premier off-spinner Ravichandran Ashwin on Tuesday underwent a solo indoor bowling session while the rest of the Indian team preferred to take a day off.

Ashwin, who suffered a side strain during the first Test win in Adelaide, where he claimed 6/149 -- his best match figures in seven Tests in Australia. The 32-year-old tweaker was accompanied by team physiotherapist Patrick Farhart and another support staff member to bowl in the indoor centre facilities even as the underfire Australian side practised in the outdoor nets. After Perth, Melbourne Cricket Ground Pitch Gets 'Average Rating' from ICC.

The strain forced Ashwin out of the second and the third Tests, with Australia bouncing back to pocket the Perth Test before the Virat Kohli-led side came back strongly to win the Boxing Day Test in Melbourne and take an unassailable 2-1 lead.

In his absence, the team preferred to back the part-timer Hanuma Vihari in the second Test before going for the specialist left-arm spinner Ravindra Jadeja for the third game. Jadeja grabbed the opportunity with both hands, picking five wickets in India's winning cause.

With India eyeing a historic series win on Australian soil, and if the SCG wicket favours the spinners, the Indian team management will be keen to include the spin twins in Ashwin and Jadeja.

Moreover, with Rohit Sharma set to miss the final Test, Ashwin's handy batting down the order puts him in good stead to bat at the No.6 spot followed by Jadeja and the rest of the tail.