In the absence of star players, Ajinkya Rahane would aim to make an impact both with the bat and as captain as he aims to continue India's dominance over New Zealand after the 3-0 whitewash in the T20I series a few days ago. The match starts at 9:30 pm IST and would be played at the Green Park International Stadium in Kanpur. 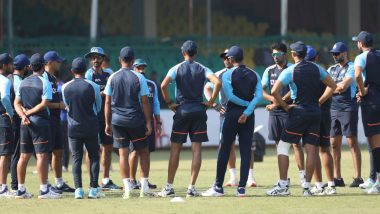 After whitewashing New Zealand in the T20I series, India would be aiming to maintain the momentum in the Test series, the first of which starts on November 25, Thursday at the Green Park International Stadium in Kanpur. The match has a scheduled start time of 9:30 am IST (Indian Standard Time). The wounds of the defeat to New Zealand in the final of the World Test Championship earlier this year are still fresh in the minds of Indian fans and they would be eager to have their team avenge that loss in this series. India have been a dominant force in Test cricket for some years and at home, they are almost unbeatable. India would be without some of their key players for this match, the likes of which include regular skipper Virat Kohli, Rohit Sharma, KL Rahul, Rishabh Pant, Jasprit Bumrah and Mohammed Shami. In the absence of these stars, the team does get weakened but India's unbelievably strong bench strength still makes them a force to reckon with. IND vs NZ Dream11 Team Prediction: Tips To Pick Best Fantasy Playing XI for India vs New Zealand 1st Test 2021 in Kanpur

New Zealand would be bolstered by the return of their skipper Kane Williamson, who missed the T20I series. He would have the tall Kyle Jamieson join him. Jamieson was New Zealand's star performer in the WTC final and the Kiwis would bank on him to deliver again. For India, Shreyas Iyer, as confirmed by stand-in skipper Ajinkya Rahane, would make his debut. The return of Ravindra Jadeja would also be a boost to the side.  India vs New Zealand 1st Test 2021 Preview: Likely Playing XIs, Key Battles, Head to Head and Other Things You Need To Know About IND vs NZ Cricket Match in Kanpur

India vs New Zealand 1st Test clash will be played at the Green Park International Stadium in Kanpur on November 25, 2021 (Thursday). The game has a scheduled start time of 09:30 am IST (Indian Standard Time).

Where To Watch Live Telecast Of India vs New Zealand, 1st Test, Day 1 on TV?

Star Sports are the official broadcasters of the IND vs NZ Test series 2021 in India and will be telecasting the games live on its channels, Fans can tune into Star Sports channels to watch India vs New Zealand 1st Test match telecast on their TV sets.

How To Get Free Online Live Streaming Of India vs New Zealand, 1st Test Day 1?

Disney+ Hotstar, the official OTT platform for Star Sports, will provide the live streaming of the IND vs NZ Test series 2021 on online platforms in India. Fans can tune into the Disney+ Hotstar app and website to India vs New Zealand 1st Test match online.

(The above story first appeared on LatestLY on Nov 25, 2021 08:00 AM IST. For more news and updates on politics, world, sports, entertainment and lifestyle, log on to our website latestly.com).