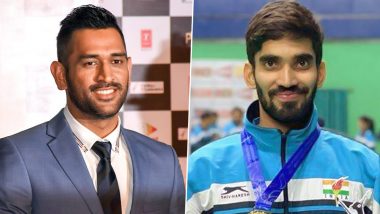 Fans were excited as the news of Indian Premier League (IPL) taking place this year was finally confirmed by IPL Chairman Brijesh Patel. IPL 2020 will be played in UAE and is scheduled to begin on September 19 and run until November 8, when the final is scheduled to be played. The confirmation certainly delighted the fans, who now can’t wait to see their favourite cricket stars return to action. Among those scored of excited cricket fans is Indian badminton ace Kidambi Srikanth, who is looking forward to watching MS Dhoni return back to the cricket field. Srikanth, a former World No 1 took to twitter to hare his delight after IPL commencement announcement.  Indian Premier League 13 Scheduled to Begin on September 19 in UAE, Final to be Played on November 8.

Dhoni hasn’t played a competitive game of cricket since July last year when India were knocked out of the World Cup semi-finals after an 18-run defeat to New Zealand in the semi-finals. The former Indian skipper initially went on a two-month break to train with his paramilitary regiment but has stayed mum on his future since then and has been out of action for over a year now. Dhoni is, however, expected to lead Chennai Super Kings (CSK) in the IPL this year.

IPL Governing Council chairman, Brijesh Patel, on Friday, announced that IPL will be played in UAE from September 19 to November 8. He also informed that the IPL will be a full-fledged season, which will involve 51 matches. Government approvals are still awaited for the tournament to go ahead.

Season 13 of the Indian Premier League (IPL) was initially scheduled to be played in March this year but the tournament was postponed indefinitely due to the coronavirus pandemic. It was hinging on uncertainty until the ICC T20 World Cup postponed for a year leaving a full window open for the IPL to take place.

(The above story first appeared on LatestLY on Jul 24, 2020 06:39 PM IST. For more news and updates on politics, world, sports, entertainment and lifestyle, log on to our website latestly.com).