IPL 2021 Playoffs Qualification Scenario Explained: Here’s A Look at the Chances of Each Team for Making it to Last Four

Like all the other editions, the Indian Premier League this season has turned out to be an exciting one and now, we are down to the last four matches for all the teams, which makes it important for fans to know how their favourite side can enter the playoffs. Read below to have a view of the playoff qualification scenario for all the teams. 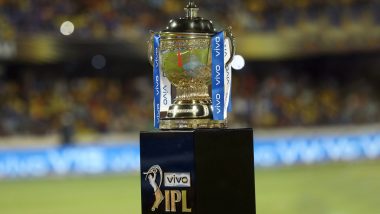 So we are down to the business end of the IPL 2021. There has been some breathtaking cricket that has been played and some unforgettable memories made. Now, it is that time of the competition where all teams would weigh their chances of making it to the playoffs. Calculations, combinations, win-loss possibilities, net run-rates--everything comes into the picture and one thing is for sure, some ruthless cricket is awaiting all of us. The Indian Premier League has always brought a lot of cricketing joy to the Indian as well as the global crowd and now, we shall take a look at the different qualification scenarios for all the sides in the mix. VIVO IPL 2021 Orange Cap Holder List.

A good look at the IPL 2021 points table gives us a clear, yet complex picture. Every team has now played 10 matches each. It is clear in the sense that we are almost certain about two teams-Chennai Super Kings (CSK) and Delhi Capitals (DC) making it through to the playoffs. The speculation and calculations would begin for the teams who are on locked on eight points.

As mentioned before, these two teams are well-placed to enter the playoffs and are almost certain to do it. Their dominant performance all season has, very aptly, reflected on the points table where they both have 16 points each. Chennai, with a win over Kolkata Knight Riders last Sunday, made it to the top spot due to a superior net run-rate, followed by Delhi, who are second in the table. One wins each for both these teams would be enough for them to make it through to the playoffs this season. VIVO IPL 2021 Purple Cap Holder List.

Royal Challengers Bangalore began the UAE leg of IPL 2021 on a poor note with two consecutive losses--against Kolkata Knight Riders and Chennai Super Kings. But Virat Kohli's side have bounced back strongly with an emphatic 54-run win over defending champions Mumbai Indians to once again put themselves in line for a playoff spot. RCB currently have 12 points from 10 games and placed third in the table, they are favourites to enter the playoffs. For that, they need to win at least two out of their remaining four matches. To be on the safe side, a third victory in the remainder of their matches would guarantee their entry into the playoffs.

The drama and tension surrounding qualification for the playoffs would revolve around these four sides. Why? Because they are locked on eight points each. KKR currently are placed fourth because of a superior net run-rate resulting from dominant wins over Mumbai Indians and Royal Challengers Bangalore. However, that position could change very soon. The two-time champions would be able to qualify if they win all four of their matches. However, three wins would also suffice, provided other results go their way.

Punjab Kings, much like KKR, are also on eight points are placed fifth at the moment. But something that might work against them is their net run-rate, which is -0.271. They would need to win either three out of four (by big margins) or all four matches to ensure that they go through to the playoffs. That looks slightly unlikely given their form and recent results.

Rajasthan Royals are too, precariously placed at sixth with eight points as well but like Punjab, they have a negative net run-rate, which can turn out to haunt them and their chances of qualifying for the playoffs. They need to win all four matches in order to qualify for the playoffs. Even if they lose one, they would have to make sure that their net run-rate improves and preferably becomes positive, wishing for other results to go their way.

Mumbai Indians, who are the reigning champions, have cut a sorry figure for themselves in the UAE leg of IPL 2021 so far. They began being in the top half of the table but a string of three losses has now seen them drop straight to the seventh spot with eight points from 10 games. Now, they would need to win all of their remaining matches (preferably with better margins) if they have to qualify for the playoffs, which looks unlikely at the moment. That is unless the champions return to form and start winning once again.

The Kane Williamson-led side has been one of the biggest underperformers this season. And things have not gone their way either. Former captain David Warner, who has been terribly out of form, was axed from the squad and earlier, they were also hit by a COVID-19 infection to T Natarajan, who has been one of their key bowlers. But it is not over for them yet. Yes, you read that correctly. Sunrisers Hyderabad can still qualify for the playoffs if they win all four of their remaining matches and also if Kolkata Knight Riders, Mumbai Indians, Rajasthan Royals and Punjab Kings win just one of their remaining fixtures. Sounds weird but that is the only way that the 2016 champions can enter the playoffs this season, without even taking the net run-rate into account.

IPL fans would now not want to miss any match at all as these four remaining matches, for all the sides, is going to be a big treat to watch. At the end, let us all hope that the best performers make it through to the playoffs and it would be interesting to see whether Mumbai Indians can successfully defend their title or not. Or would we see new champions? The answers to these questions would soon unravel slowly!

(The above story first appeared on LatestLY on Sep 28, 2021 11:02 AM IST. For more news and updates on politics, world, sports, entertainment and lifestyle, log on to our website latestly.com).