Making his debut in 2004, Dhoni didn’t take long in showcasing his potential. He played one brilliant knock after another and reached the top of the ODI batting rankings in just 42 innings. Dhoni didn’t look back since then and became the mainstay of the Indian team. 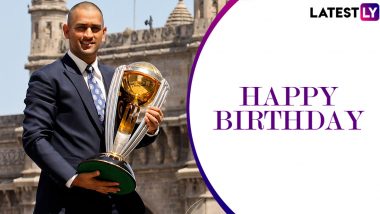 Former Indian captain MS Dhoni celebrates his 39th birthday on Tuesday (July 7) and wishes are pouring in for him from all around the world. Widely regarded as the best wicket-keeper batsman to have ever stepped onto the cricket field, Dhoni has guided India to many memorable victories and his record in all forms of cricket is nothing short of sensational. In fact, he is the only captain in the history of the game to lift the T20 World Cup, World Cup and Champions Trophy. His batting prowess has also given nightmares to many bowlers as he possesses the ability to hit sixes at will. MS Dhoni Birthday: Dwayne Bravo Releases ‘Helicopter 7’ Song As He Pays Tribute to the CSK Captain.

Making his debut in 2004, Dhoni didn’t take long in showcasing his potential. He played one brilliant knock after another and reached the top of the ODI batting rankings in just 42 innings. Dhoni didn’t look back since then and became the mainstay of the Indian team. His ability as a wicket-keeper is also second to none as not many batsmen can dare to charge down the track when Dhoni is behind the wicket. On the occasion of his 39th birthday, fans went berserk on Twitter and showcased their love for the Ranchi-born cricketer. Have a look. MS Dhoni Birthday Special: Huge Sixes by Former Indian Captain That Will Leave You Jaw-Dropped.

The only captain in the history of cricket to win all ICC trophies - #MSDhoni - It’s Thala’s birthday! pic.twitter.com/NvxCMdebGg

Happy Birthday to the most loved captain in the world.#MSDhoni👩‍🎤🎂🍾💐🎁🎉🎇. @msdhoni pic.twitter.com/jUqsYTE3sl

Fans Waiting For His Comeback!!

#MSDhoni Happy Birthday. One of the best captain🥳I want you to look back in the field again pic.twitter.com/RK0gmL0BaV

Happy Birthday Legend...Thanks for being an inspiration for Millions*. pic.twitter.com/HsdQJXl2UR

As of now, the legendary cricketer is enjoying time with his family amid the COVID-19 crisis. However, his retirement plan still remains a hot topic of discussion among cricket fans. Dhoni hasn’t played a professional match after India’s exit in the semi-finals of 2019 World Cup. He, however, was set to lead Chennai Super Kings in the 2020 edition of the Indian Premier League (IPL). Just like many other major sporting events, the T20 tournament also got postponed due to the Coronavirus pandemic.

(The above story first appeared on LatestLY on Jul 07, 2020 09:20 AM IST. For more news and updates on politics, world, sports, entertainment and lifestyle, log on to our website latestly.com).