Under-19 captain Prithvi Shaw is all set to make his debut tomorrow at the Saurashtra Cricket Association against West Indies. 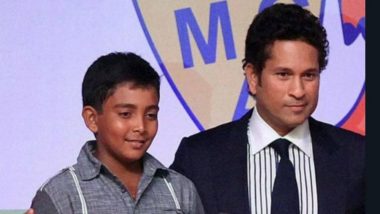 Under-19 captain Prithvi Shaw is all set to make his debut tomorrow at the Saurashtra Cricket Association against West Indies. The Indian team announced the 12-member squad ahead of the game tomorrow. Now, Prithvi Shaw who is all set to make an appearance in the Indian team, shares quite a unique record with master blaster Sachin Tendulkar. Shaw so far has played 14 First Class matches only second to Sachin Tendulkar who has played 9 matches for Mumbai. India vs West Indies 2018 Schedule: Full Match Timetable With Dates, Timings, and Venue Details as Windies Set To Play 2 Tests, 5 ODIs and 3 T20Is.

Shaw will surely be looking forward to keeping up the legacy. The right-handed youngster has always been in the domestic circuit for his performance. He was the captain of the Mumbai’s Rizvi Springfield High School and led his team twice for the Harris Shield.

Shaw has also led the Mumbai Under-16 team in the past and has been in the news for his blistering performance. His successful stint at the Under-19 World Cup earned him praises from Sachin Tendulkar, Rahul Dravid and many others.  Prithvi Shaw in India XII Against West Indies Test Series: Check Out Seven Interesting Records of the 18-Year-Old Right-Handed Batsman!

While speaking to the official website of the International Cricket Council (ICC), Dravid said, “Both Mayank and Prithvi have shown over the last year or so with their performances that they are playing really good cricket. They played well on the tour of England and they played well here as well. They have put in some really good performances and it is nice to see them developing and growing as players.”

(The above story first appeared on LatestLY on Oct 03, 2018 10:42 PM IST. For more news and updates on politics, world, sports, entertainment and lifestyle, log on to our website latestly.com).