Both sides are equally balanced and have players in top form. It is always a memorable clash when these two sides go up against each other and as KKR would aim to march on to Qualifier 2, RCB would look to make it big in Virat Kohli's last season as franchise captain. 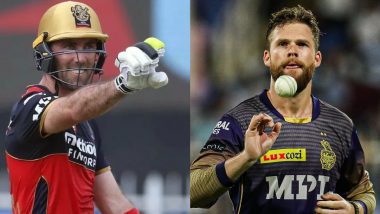 A resurgent Kolkata Knight Riders (KKR) side would be keen on proving a point or two when they face an upbeat Royal Challengers Bangalore (RCB) outfit in the Eliminator of IPL 2021 on Monday, October 11. The match would be played at the Sharjah Cricket Stadium in Sharjah and would begin at 7:30 pm IST. Kolkata Knight Riders have taken the UAE by storm with a completely different approach when the IPL resumed last month. They were seventh on the points table and looked to be on their way out of the competition but what a turnaround it has been from them! Now, they find themselves having played some good cricket and into the playoffs, and up against a team who they defeated convincingly last month. RCB vs KKR Dream11 Team Prediction IPL 2021: Tips to Pick Best Fantasy Playing XI for Royal Challengers Bangalore vs Kolkata Knight Riders, Indian Premier League Season 14 Eliminator

But RCB have grown into a better, balanced and dominant side ever since that nine-wicket defeat. They have been aided with the return of form of Glenn Maxwell and with purple cap holder Harshal Patel consistently scalping important wickets, they are a formidable side now and would pose a difficult challenge to Eoin Morgan's men on Monday. RCB vs KKR Preview: Likely Playing XIs, Key Battles, Head to Head and Other Things You Need To Know About VIVO IPL 2021 Eliminator

It has been a Glenn Maxwell show for Royal Challengers Bangalore this season. After a poor start, the Australian has returned to form with a bang, scoring six fifties this IPL season and has been one of the sole reasons why RCB have been a dominant side with the willow, especially in the UAE leg of IPL 2021. He is once again hitting those boundaries at will, supporting youngsters in the side to win matches and has been superb for Virat Kohli's team. His consistent show in the middle-order makes him a good pick for the captain's slot of your fantasy team.

Lockie Ferguson has been exceptional for Kolkata Knight Riders in the UAE leg of IPL 2021. He was not part of the squad when Pat Cummins played in the India leg of the competition earlier this year but has managed to establish himself as one of the core members of KKR's bowling unit. His raw pace and ability to pick wickets has helped KKR reach the playoffs and even in the match against Rajasthan Royals, he played an integral role in breaking the back of their batting with three wickets for just 18 runs. His performance against Maxwell, Virat Kohli and AB de Villiers could determine the outcome of the Eliminator.

(The above story first appeared on LatestLY on Oct 10, 2021 08:44 PM IST. For more news and updates on politics, world, sports, entertainment and lifestyle, log on to our website latestly.com).